Another old smithy - Carlton on Trent

- September 28, 2010
The visit to the blacksmith's was a helpful plot device for so many pony books; all lost now the farrier comes to you, though there is of course the long wait until the farrier turns up, the sudden dearth of mobile phone contact from said farrier as you wait about, the deep frustration as you finally give up, and then the twilight trek up to the field, armed with threats as you spot someone trudging around there after the horses, only to find it is the farrier, turned up at last.
Below is the traditional scene beloved of pony books: 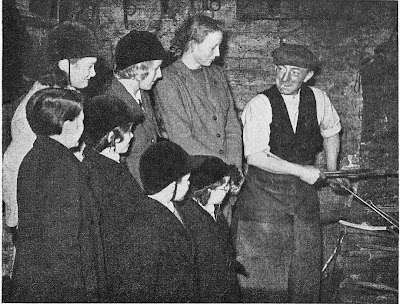 and here, because I am on a bit of an old equestrian building mission at the moment, is another smithy: this one is at Carlton-on-Trent, and the picture comes from Riding Magazine, July-Sept 1944. At that time, the occupant was F Naylor, who put up the noticeboard with the verse. 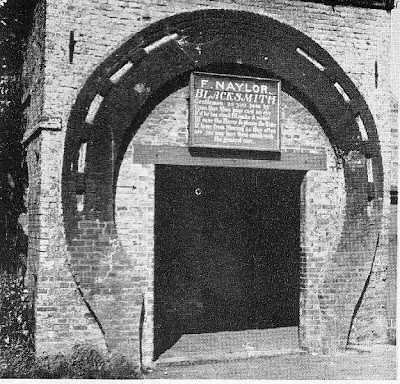 F Egerton, who sent in the picture, sent in the text of the verse as well:
Gentlemen as you pass by
upon this Shoe pray cast an eye;
If it be too strait I'll make it wider
I will ease the Horse and please the Rider.
If lame from showing as they often are
You may have them eased with the greatest care.
This smithy still exists; it was listed in 1961. Whether it had acquired its rather unsympathetic black and white colour scheme by then I do not know: listing generally lists a building as it was at the point of listing, so it's at least possible, though a shame. The original probably had a lot more subtlety of colour: even it was black and white, the modern day version looks rather ersatz now.
It looks as if the building is now a garage: the listing describes the arch as being filled in with garage doors. Could be worse, I suppose. Susan in Boston said…
Just for kicks (err....no pun intended), here's a link to the only real smithy I've ever been in...located in Old Sturbridge Village, a living history museum, in Bolton, MA, USA. There's a neat list of questions and answers if you scroll down a bit.

It's facinating to watch a smith working with the tools and facilities of the early 19th centurey (this building is one that usually has a crowd gathered inside!)
28 September 2010 at 21:14