- September 25, 2010
I came across the photograph below in a World War II copy of Riding magazine from Jan-March 1943. Riding was then down to 4 issues every year, down from the monthly pre-war issue rate. The war was reflected, however briefly, in much of the correspondence columns. J D Robinson contributed this photograph, which is of a blacksmith's shop at Roxby, North Yorkshire, purely so readers of the magazine could see it - a small break from the pressures of war. Another correspondent in the same issue talked of the importance of being able to have some relaxation so that war work could be carried on - "The Managing Director of a certain aircraft factory puts in a superhuman number of hours on the job... He has turned to the horse now, and relies on this to give him the brief relaxation necessary to enable him to carry on work at such terrific pressure."

Looking at this building must have had a little of the same affect. I have never seen anything like it, and my immediate thought when seeing it was to wonder if it still existed. So many fascinating buildings have been bulldozed out of existence in the interests of expedience or profit. 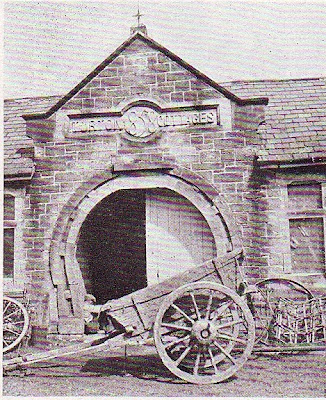 It does. It was listed on November 20, 2001 - rather late bearing in mind its unusual form. J Turton Esq, physician to George III, bought the manor of Roxby from the Boynton family. He died in 1806 and had no children, so his estates were left to Edmund Peters, who took the name of Turton. The Turton family built the school in the village, and presumably this range of cottages as they are inscribed, rather unmissably, Turton Cottages 1858 above the doorway.

The building is no longer a forge. Now that farriers generally travel to you rather than the other way around, I suppose the building became redundant. What the building is currently used for I am not sure; presumably it has not been used as a forge for some time, as a website about the local area is unaware of its former purpose. 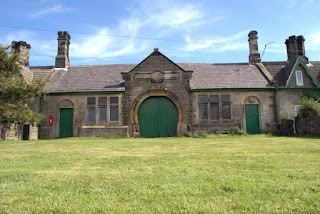 It's lovely to see it's still there. I wonder if there will ever be a world in which it will return to its original use.


Modern photograph - © Copyright Stanley Nixon. Many thanks for sending the photograph to me.
The horse - buildings

dwaynetta said…
Passed this spot today and had to beg my partner - who drives too fast! - to reverse and stop. Yes, the cottages are still there and appear to be in good condition. I have no idea if they are now private dwellings.
9 October 2011 at 19:23

Jane Badger said…
Oh, how exciting! I'm glad the buildings are still there. Thanks very much for the update (and thank you to your partner for reversing - I have a mental picture of this being done at great speed!)
10 October 2011 at 13:45

Gareth Severs said…
I love visiting this spot also.
My great grandfather served an apprentership with the Blacksmiths whom was Dawson at Newholme near Sansendhere for many years in the early 1900's. I have some old photos of my great grandfather and his work collegues stood outside this exact spot.
15 November 2011 at 21:44

Jane Badger said…
How lovely to hear from you - it's great to hear from someone with such a direct connection. If you'd like me to put the photos on my blog, please email me. There's a link at the top right of the blog.
17 November 2011 at 10:24

nathan severs said…
i was down there just the other day and it still looks great ,i take my own kids down there now to fish in the beck for trout ,i will try and get some pics of my grand father working in the blacksmiths ?
26 March 2012 at 16:54