- September 26, 2010
I always thought when Ann won the Best Dressed Child Rider in Ruby Ferguson's A Stable for Jill that there had been another competitor there with flowing ringlets. Alas, there was not. Flowing green velvet with ostrich feathers yes; Susan Pyke in black and silver hanging on her horse's neck yes, but ringlets no.
Never mind.
Here's some flowing ringlets: 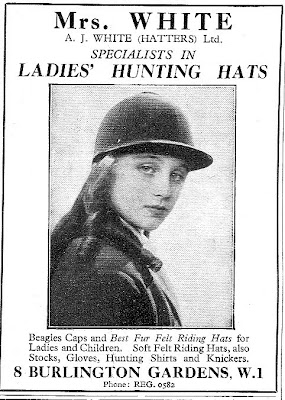 This child was a regular fixture in the advertisements in Riding. Here she is in 1942, and she was still going in 1952. Those ringlets are so very much the antithesis of all that good sense and sensible dressing one was recommended in pony books. I wonder if the child rode, and if she did, how long those ringlets stayed in.
I was so delighted by this photograph I had high hopes for the White oeuvre as it developed over the decades, but alas, these more restrained examples are typical of its later output. 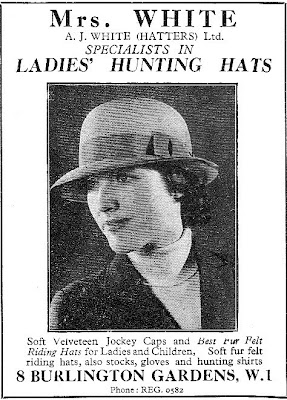 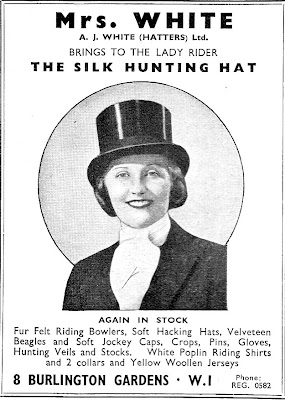 Christina Wilsdon said…
Those are some of the sausagey-est sausage curls I've ever seen. Do you have the Beverly Cleary "Ramona" books in the UK? Ramona always got in trouble for tugging the "boing-boing curls" of a goody-two-shoes girl named Susan (it's always a Susan who's a troublemaker...hmm!).
27 September 2010 at 16:04

Goldielover said…
I thought it was Susan Pyke's mother in Jill's Gymkhana who was talking about flowing ringlets when reminiscing about being put up on her pony by the hunt Master when she was a small child.
27 September 2010 at 16:12

Christina Wilsdon said…
It was definitely somebody's mother! That rings a bell. Was it maybe the mom who brought two small bratty children to learn to ride when Jill was running a riding school? I vageuly remember her being struck dumb at "this appalling vision" or some such.
27 September 2010 at 16:35

Jane Badger said…
Susanna - doesn't she? It looks like one of those Lenare society portraits, but of a child who had Issues.

Yes, we do have the Ramona books, and Goldie Susan Pyke's (ooh, wrote Susan Puke there before re-typing) mother does sound right for the flowing ringlets. I'm sure there are flowing ringlets somewhere in Jill.
27 September 2010 at 17:12

Goldielover said…
Dragged out my early Armada edition of Jill's Gymkhana, and Susan Pyke's mother definitely comments on having long flowing curls down to her waist worn with her little habit, and being put onto her pony by the MFH in the chapter entitled Lablonde.
27 September 2010 at 17:31

Christina Wilsdon said…
I am glad you cleared that up so that I do not have to dig out my books in this messy office :) That was always one of my favorite bits, what with Jill commenting about how unprofessional it was to have those flowing ringlets all over the place while on horseback.
27 September 2010 at 17:43

Jane Badger said…
There we have it. Mrs White's model is Susan Pyke's mother. Thanks Goldielover!
27 September 2010 at 18:04