Review: Stacy Gregg - The Princess and the Foal

- January 10, 2014
Princess Haya has achieved remarkable things. She represented her country in show jumping, and competed at the Sydney Olympics. She is the head of the FEI (International Equestrian Foundation), currently for the second time, having been elected twice. She recently refused to stand for a third term, and the end of her second term has unfortunately become mired in controversy with the doping scandals involving the stables of her husband Sheik Mohammed Bin Rashid Al-Maktoum. Whether this helps or hinders Stacy Gregg’s book I do not know: she’s already produced two phenomenally successful pony series, Pony Club Secrets and Pony Club Rivals, and I don’t imagine her substantial fan base is going to be particularly put off reading this book by any scandal involving her heroine. 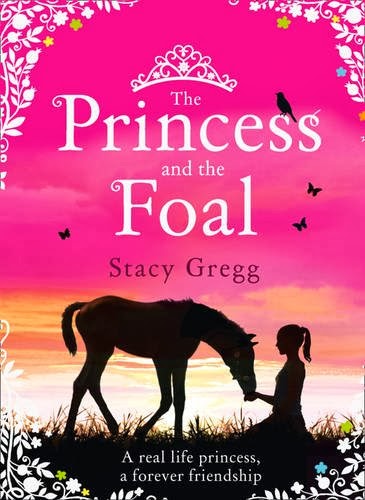 The Princess and the Foal is a fictionalised account of the early life of Princess Haya Bint Al Hussein of Jordan, who at the age of three suffered the tragic loss of her mother in an aircraft accident. The Princess raises an orphan Arabian foal, Bint Al-Reeh (Bree), who provides escape both from the rigours of palace life and her governess, and her grief: because “horses don’t care who you are.”

This is an interesting story about a real life horse mad princess. It’s difficult, when your subject is alive and well, to inject any of the childish horrors into the story that might have leant it a little more spirit. Princess Haya is mischievous, and lively, but her misdemeanours are childish pranks that go wrong. There’s none of the sheer, gratuitous awfulness children generally visit on each other. I will not bore you with tales of what my sister and I got up to at a similar age. Perhaps had we been born princesses, it would have been different.

One of the most interesting things about Princess Haya is what she achieves as a female in a society very different to ours, in which women have only been allowed to compete in the Pan Arab equestrian games since 1985. Ironically, it’s the Princess’s British governess, Frances, who thinks princesses “should be at home, preparing for palace life, marriage and royal duty.” Fortunately the Princess’s father didn’t share the same point of view, but it is a pity the position of women in both the Hashemite kingdom in particular, and the Middle East generally, isn’t explored more, because an understanding of it is essential to understanding just how remarkable the Princess’s achievements are. She was the first woman to win a medal in Pan-Arab equestrian sport (not, as it says on both the Princess’ website and the afterword, the only one. On investigating the FEI website, I found that in the 2011 games, the Lebanese team, which included two women, Carla Kattouah, and Malih Dana, won silver in the dressage team event).

The Princess and the Foal is certainly an achievement on the part of the author. She’s done as good a job as she could with the chalice she’s been handed.

Age of main character: from three to twelve


Stacy Gregg on my website, with an illustrated bibliography
Review