- January 19, 2014
I'm still stuck in the 1930s with today's blog post. Having written about Moyra Charlton's Midnight Steeplechase (1932) and Marjorie Mary Oliver's The Ponies of Bunts (1933), I can't leave the thirties without writing about the author who set the template for the pony story: Joanna Cannan. With her first children's book, A Pony for Jean (1936), we see a girl who moves from the town to the country (though it's not a lifestyle decision: they're forced out after the money runs out when pepper goes wrong for Jean's father); Jean doesn't have a pony, and doesn't know how to ride. She gets a pony, and learns to ride, and triumphs over others at the end-of-book gymkhana. When the bare bones are set out, the book seems trite and unimaginative, but it is illuminated by its author's wry humour.


"It'll be great fun seeing you at the rallies." She looked at the cousins, and said, 'Won't it?" in the voice of a commanding officer.The cousins said 'Yes,' meekly, but I knew that it wasn't 'Yes,' that they were thinking."

Jean's adventures didn't end with A Pony for Jean. The series would probably win any prize going for blinding simplicity of title. What you read was what you got: after A Pony for Jean came Another Pony for Jean (1938) and More Ponies for Jean (1943). Fortunately the content of the series outweighs their pedestrian titles. Joanna Cannan's children, the Pullein-Thompsons continued to provide plenty of source material for her portrait of an independent, pony loving, girl. 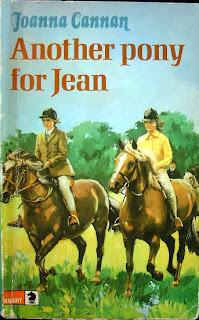 In the second book, Another Pony for Jean, the family's fortunes have improved (whether pepper went right we're not told), and Jean's been sent away to school with her Cousin Camilla. Most of the action takes place, therefore, in the school holidays. Jean hunts, and most exciting of all, finds that the first aid she's practised on the leg of the dining table comes into sudden use. Jean gets a reward for her good sense: a pony, Charity. 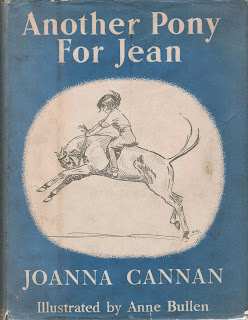 This book has just as much humour as the first. Jean makes hopeless attempts to build a bantam house, and has a staggeringly awkward tea with Charity's owner until they both unbend over their shared hopelessness. It's an excellent read, and remains one of my favourites.