- January 09, 2014
I mentioned this book in my round up of up and coming horse books, and that was as far as I got. That was my mistake, as this (mostly true) account of a wartime childhood is a fine read. The book does have a slightly odd layout at times, with single words on a page where the line ought to run on, but that’s a minor matter. It's a must read for anyone who wants to know about the early life of the author creator of Fly-by-Night, Flambards and Patrick Pennington. 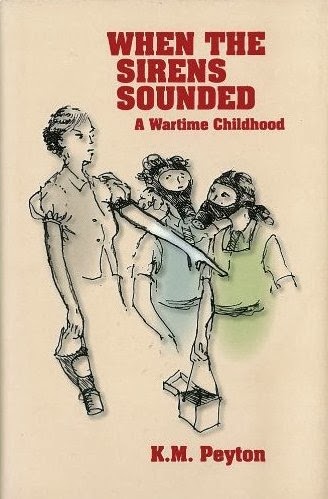 When the Sirens Sounded is a fascinating account of a girl growing up during wartime, and for whom it is therefore normal to be perpetually cold, to hear air raid sirens on a daily basis, and to experience the petrifying wait for the cut out of the doodlebugs.

K M Peyton was at school during the war, and the population of the school fluctuated with the fortunes of the war. As things went well, girls came back, and as the bombings increased, they were sent out of London. K M Peyton and her family remained where they were throughout. Kathleen had two passions in her life: horses, and as time went, on, boys. The boys in the book, she tells us later, were fictional, but the ponies were real. The things the pony obsession makes you do are all there: the endless imaginary ponies, the extended trots down the footpath, and the friendships whose only basis is the horse.

The author’s neat and occasionally acerbic observation of character are well to the fore. I felt for poor blue Biddy, asthmatic in a pre-inhaler age, and fumed too as Annabel, beautiful, rich, gifted and utterly entitled swept in and batted her eyelashes at people’s boyfriends simply because she could. Being K M Peyton, the horses and ponies are of course beautifully done. The end of the book, where Kathleen rides off with the enigmatic, kind Con, may well be the last thing K M Peyton ever publishes. She’s said she’s giving up writing. It’s a wonderful piece, and although written after they were created, it reads as if she’s riding out into that passionate world she conjured up, with Christina, Ruth, Patrick, and Fly and Swallows all before her.

“Ahead of me the chestnut pony’s tail swirled out in sudden movement. My pony’s stride lengthened, smooth, so smooth, the perfect pony that I had dreamed of all my life, the warm shoulders sliding rhythmically before me and the soft caress of his hooves over the ancient turf....

Above me a great canopy of dusk-violet sky where the first stars were faint, not yet competing with the spectacle below. What more could I want? Could I ever want? On top of the whole world, the lights beckoning and the stride lengthening, faster and faster, chasing the wonderful boy across the arc of the downs, into the night.”


K M Peyton on my website - with an illustrated bibliography
Review