- January 12, 2014
There are massive spoilers in this review. You’ve been warned.

Having just read K M Peyton’s account of her wartime childhood, When the Sirens Sounded, which is direct, simple and utterly involving, it jarred a little to come straight to A Horse Called Hero with its maelstroms of emotion, so unlike the pared back awfulness; the restraint of When the Sirens Called. There, when the telegram boy calls, everyone knows what that means: at best, missing, at worst, dead. With typical British reserve, no one calls immediately, but you do not doubt for one second their concern; their horror. 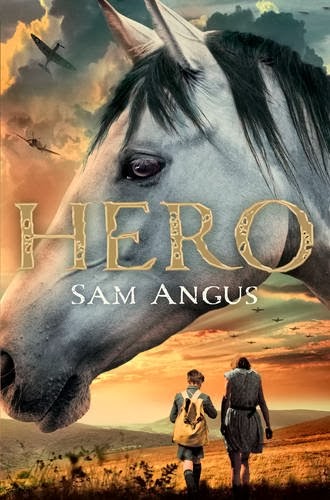 There is a difference between the direct simplicity of expression of those who were there, and what is conjured up in the imagination of those who were not. Sam Angus has written a novel set in what is to her, history. She’s had to imagine what went on in the hearts and souls of her characters, but what she’s done is transplant a pair of thoroughly twenty first century children to wartime. Granted, Dodo and Wolfie Revel are London children evacuated to the country in traumatic circumstances, but compare them with Nina Bawden’s Carrie (Carrie's War, 1973), or Mary Treadgold’s Templetons in We Couldn't Leave Dinah (1941), all of whom suffer the horrors of war and who react to the experience with emotion, of course, but it is an emotion all the more powerful for being restrained and contained by the reality of their situation. Compare Caroline Templeton’s farewell to her pony Dinah when it comes, compared to her dreams:

"Well, one wish of hers at any rate had been granted. She'd pictured herself over and over again during the dreary sojourn in the Cave being granted the opportunity of bidding a romantic farewell to Dinah. It was now five o'clock. She could say goodbye to Dinah for some two hours before the General came to intern her. Somehow the prospect did not allure her. She was much more concerned with getting Mick's message through to the Beaumarchais."

with Dodo’s reaction to a knacker’s cart being sent for an old hunter:

“They left her behind, Bassetts did, just left her behind when they left Windwistle. Irish mare. Won’t hunt again an’ll ‘ave to shoot her for the hounds.’
‘Savages,’ said Dodo, raising her head slowly, now looking him square in the eyes in disgust.
‘Where’s the top field?’ asked Wolfie.
‘Savages,’ repeated Dodo.

Dodo and Wolfie do have major problems with which to contend. Their father, who was awarded the Victoria Cross in the First World War for his part in the cavalry charge towards Moreuil Wood, is being court-martialled. He and his regiment were amongst those charged with defending Wormhoudt to keep the way clear for the troops retreating to Dunkirk. Having run out of ammunition, many of the British soldiers surrendered. The men were herded into a barn by the SS, and those that survived the grenades flung in after them were shot. In A Horse Called Hero, the children’s father, Captain Revel, survives the massacre, only to be charged with desertion, as none have survived who can confirm his version of events. The Wormoudt Massacre was real: Captain Revel a fiction. His children suffer for what he has done: the first family with whom they are evacuated refuse to shelter the children of someone who’s been charged with desertion, and the children suffer for years as they wait out the time before their father is court-martialled.

The great positive thing Wolfie has in his life is his horse, Hero.  The mare for whom the knacker’s cart is sent, is, it turns out, is already dead, having given birth to a foal. Wolfie raises the orphaned foal, and the two become inseparable. Hero is a horse among horses, a pinnacle of equine beauty and grace. And he's broken at the age of two (he's a hunter type, not a Thoroughbred, for whom there might have been the vestige of an excuse).

This is the second book I’ve read recently at which a horse is broken at the age of two. This did happen in the 1930s and 1940s, but it was not generally considered best practice. Neither was it best practice for said two year old to compete in a point-to-point. However, it does give the author the opportunity to give full rein to a commentator who has drunk deep at the well of emotion.

“see the fierce youth of Number Five, both horse and rider....”
“They’re on the home strait and he’s found he’s got wings – he’s outlasted, outstrided, outpaced all others... “

None of that is any good in the end, because Hero, along with their new host’s Exmoors, is stolen. But every cloud has a silver lining: when their vicar host dies, his daughter finds them a place in the North, where there just happens to be a mine. Which just happens to be the mine in which Hero ends up.

The further I got with this book, the more I felt I was actually watching a film. It moves from set piece to set piece: the cruel, excluding class mates; the horrified glance at the newspaper headline sticking out from a girl’s satchel, the brave defiance of Dodo and Wolfie turning round and singing a carol towards the congregation, who have refused to indulge the vicar they see as a pacifist. The end of the book is pure, classic, disaster movie. Wolfie is looking for his horse down a mine: there’s an underground explosion, and one by one, the survivors are picked off, until only our hero, aided by his brave horse, is able to save the day. Meanwhile, at the top of the mine, sister Dodo flings herself at those manning the top of the mineshaft:

“On the lip of the old shaft, men were calling down, their faces wild with hope, torches flashing into the darkness below.
‘Send me down!’ Dodo cried. ‘I must go down.’
Someone was pulling her back and saying, ‘There’s no way to get down.’
She broke free. ‘Send me down!’ she screamed.

If you’d been mine, gel, you’d have been told to get a grip. Fortunately, Dodo does not have to emote for long. For Wolfie emerges from the mine, naked to the waist, backlit with the light of a new dawn, hand around the nose of his tall and quivering horse.  Cue swirling violins, the brave, meaningful light of the new day, and handkerchiefs all round. And Daddy, my Daddy.