Review: Maggie Dana – After the Storm

- January 23, 2014
After the Storm is the eighth book in the Timber Ridge Riders series. The last episode had arch villain Angela Dean shipped off elsewhere, but she’s back in book eight, and she’s not been improved by her absence. More importantly, neither has her mother. 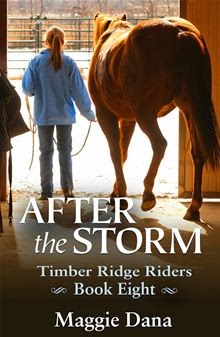 It’s winter in Vermont, and when the electricity goes out in the barn, Kate, Holly and Kimberley are left to feed the horses. In the pitch black, the buckets get mixed up, and the pony vulnerable to colic gets the wrong bucket. After they’re rescued from the storm, Angela spreads the rumour that it was Kate who was responsible, and nearly everyone believes her. Holly wants Kate to stand up for herself, for once, but Kate’s useless at confrontation, and Angela walks all over her. Relationships then spiral out of control as Kate’s fury at herself, and Holly’s hurt and desire to protect her mother lead to a major falling out of the ways.

This book has all the things that go to make the Timber Ridge Riders such a good read: the plot moves on, but never so much that you think, “Right, that’s it.” There’s plenty left unresolved, like Kate’s dithering between her notional boyfriend, filmstar Nathan, and the rather more available Brad, and there’s an interesting situation set up for the next book, because Kate’s left Timber Ridge and has moved Tapestry to a new barn. It’s interesting to see the girls paint themselves into corners they don’t know how to get out of, and I enjoyed seeing the changing dynamics between Holly and Kate.

I do enjoy this series. Having been with it from the beginning, I’m comfortable with the characters, and involved enough with them to want to find out what happens next. The author is an excellent plotter, and obviously enjoys her characters. The one I felt I wanted to know more about was the conflicted Kimberley: there were hints dropped that there might be more to her than simply Angela’s sidekick, but they weren’t really developed. Perhaps Kimberley’s time will come in the next volume.

If you like this series, you’ll love the latest volume.


Maggie Dana on my website, with full illustratedbibliography
Review

Maggie Dana said…
Jane, thank you so much for this. As usual, you put your finger firmly on the pulse of a book and let readers know what's going on without giving stuff away.

I'd like to mention that reviewing -- good reviewing -- is an art and I admire readers who do it as well as you do.