- June 06, 2012
The Times did a baking competition recently: make an iconic cake for the Jubilee, was the brief. I didn't enter, but the people who did produced some amazing stuff. The winning cake The Times billed as one that could become as much a legend as the Battenberg - having tried several times to make sense of the instructions, I'd disagree with them there. The Battenberg involves four bits of sponge, not hundreds. One of the runners up did a lovely Union Jack with crystallised flowers. I can do that, I thought. I have crystallised flowers before. Time consuming, but possible.

So I did. Was slightly stymied by a lack of blue flowers - to be more accurate, have plenty but have no idea whether they're edible or not, and couldn't find out, but in the end, I got together a selection which would poison nobody. I wielded egg white, and caster sugar. I arranged everything neatly on greaseproof paper on a baking tray, and put it into the plate warming oven. And then went to fetch my son home from University.

On the way home, some three hours later, I remembered what I'd done, or to be more precise not done. The results were interesting, but certainly not edible, and I did try.

Listening to the sermon in church the next day, I had a bright idea on what to do with my cake. I don't know what it is about sermons. Every week I make determined efforts to listen to the whole thing, and every week, find my mind drifting off elsewhere. Maybe it is because that is the one time my mind is more or less quiet, and therefore the one time God has to try and get an idea in there, because I often have ideas during sermons.

Anyway, here is my Jubilee cake. My daughter, who is a keen viewer of the Great British Bake Off, was horrified. "Are those white flowers edible?" she asked. "No idea," I replied, "but I'm not going to leave them on there anyway." "MARY BERRY says you mustn't use flowers unless you know they're edible, and YOU DON'T KNOW." True. I have let daughter, and Mary Berry, down. 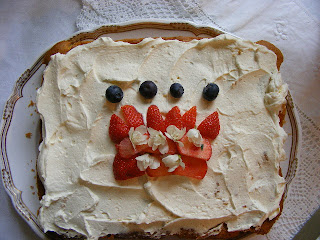 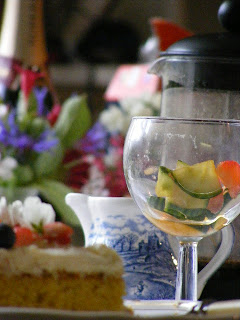 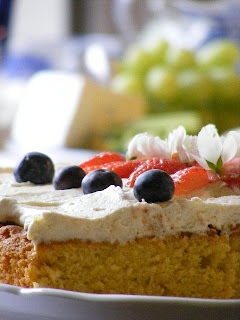 The best dressed tables have leopardskin. 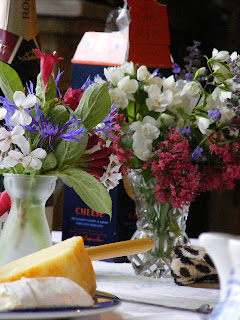 Oh, and bunting! I did bunting! Having looked at bunting week after week in the shops, and thought "You must be kidding," I was possessed two days before the Jubilee weekend with a desperate desire to have bunting, of which of course there was none. Daughter was press-ganged into ironing, and I chopped up some blue and white gingham I bought for one of daughter's dance projects, some crimson silk from my last attempt to make clothes (well over 20 years ago - total failure; still has the pins in), some white lining fabric and some cording from when I recovered the sofa (heartbreaking - took months and months, and cat brought a mouse in which hid in the sofa and chewed large parts of it two weeks after I'd finished it). And there was bunting. Forgot to mention the glue: not a stitch in the whole lot. 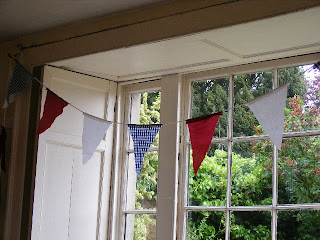 I hope everyone who celebrated the Jubilee had a fantastic time. I was in utter awe at the Queen, standing for hour after hour in the soaking wet during the River Pageant, and the amazing singers who sang their hearts out despite being drenched and frozen. And the Archbishop of Canterbury at his best. It made one proud to be British.
Homelife

Christina Wilsdon said…
Makes the rest of us jealous not to be British. Looks like you all had fun and my rellies also told me about the Queen and Duke standing for 4 hours on a barge. Talk about keep calm and carry on!
6 June 2012 at 16:00

madwippitt said…
Borage! Wrong sort of blue, but edible flowers - look great floating in a glass of Pimms or white wine too ...
How sad about the cake ... too far gone even for trifle?
Our local shops all sold out of bunting: one of the local schools hung up their own on the railing outside made up of dozens of portraits of the Queen painted by the kids - looked wonderful!
7 June 2012 at 09:11

Jane Badger said…
Indeed - poor Duke though, with an UTI. Been there. No fun at all.

Borage would have been on there like a shot, Madwippit, if mine had been anywhere near out, but it's a good 3 weeks off flowering. My garden is always a good 2 weeks behind everyone else's in the village.
7 June 2012 at 11:15