Fame: when riders turn into authors

Hands up if you knew Katie Price had written pony books (and hands up too if you’ve actually read one). Katie Price’s books are a phenomenon of this celebrity-obsessed century, in which ghost-written books sell because of who they’re by, rather than what they’re about. The celebrity who turns to pony book writing is rare: the casts of Made in Chelsea and The Only Way is Essex, were they to turn to writing fiction, would probably not make the pony book their first choice. The great and the good in the horseworld don't always go for the pony book either. The racing fraternity do like to follow in the footsteps of Dick Francis and write a racing mystery for adults:  John Francombe; Jenny Pitman and Richard Pitman – they’ve all done it.

The field of children’s pony literature has not been neglected. Famous riders have produced more than just horses. Pippa Funnell (Olympic medallist event rider) is now churning out her Tilly series, and before her Ginny Elliot (also an Olympic medallist event rider) wrote a trilogy of pony books.  Marion Coakes (silver medallist show jumper) ghost-wrote Sue-Elaine Draws a Horse (1971) with Gillian Baxter.  Pat Smythe is the most notable rider-turned-author: she was a heroine to a generation, who succeeded in the male-dominated world that was showjumping in the 1950s. Her Three Jays series, the adventures of Jimmy, Jane and Jacqueline, allowed fans to imagine they were part of Pat’s life, together with her fictional characters Jimmy, Jane and Jacqueline. 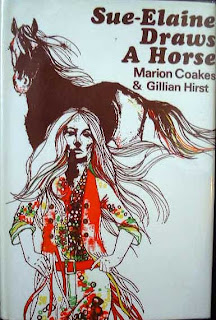 Pat’s were the only stories of the last century to go into several editions. None of the other horse-world authors active in the 1950s were able to repeat her success. This was due purely and simply to Pat’s celebrity: after she retired and faded from view, her pony books stopped selling. Once a celebrity’s fame fades, their books fade too, unless they have some real quality to start with. There were several authors who wrote rather more interesting books.

Dorian Williams was a show-jumping commentator (and MFH, and founder of a Shakespeare festival), the sound of whose voice whisks those of us old enough to remember when show jumping was a regular feature on television back to the time when there were three television channels, not all televisions were colour, and you could drink in, hour after hour, horses on television. Dorian Williams wrote a pony book trilogy about Wendy, who won a pony (Wendy Wins a Pony (1961), Wendy Wins Her Spurs (1962) and Wendy at Wembley (1963). Wendy is pretty soon whirled off into the world of working with horses: she doesn’t get any time at all to do the conventional pony-book stuff of pottering about with her pony. The trilogy is a lengthy, though generally entertaining, advice piece on working with horses. 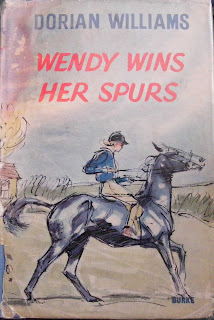 Rather more challenging fare emerged from the showing world. Glenda Spooner started (with Gladys Yule, who did not write a pony book, as far as I know) Ponies of Britain, from whose show she famously banned PONY Magazine columnist and author Caroline Akrill. Glenda Spooner took no prisoners, the editor of PONY commenting on the “unique style” with which she took meetings. Her fictional works were generally aimed at the older reader, but the most notable was The Silk Purse (1963). This is a generally acidic look at the world of showing, in which Gillian and her effective but unlovely pony Tommy are propelled through class after class by her showing-obsessed mother. In a section that reminds me of that notorious Dallas series in which an entire series’ plotlines were explained away by being simply a dream, the plot of The Silk Purse takes off into lunatic fantasy half-way through, only to be explained by its all having been a dream. (A blacksmith turns Tommy into a prize-winning show pony, if you want to know.) On first reading, it’s fair to say it’s unsettling. I would love to know what Mrs Spooner said to her editor about this section. Or whether her editor dared to raise it with her at all. 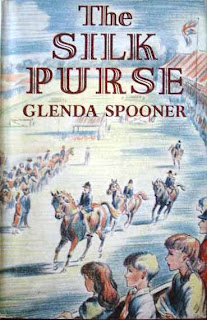 Probably the best of the pony book authors whose career started elsewhere was Pamela MacGregor Morris. She was an equestrian journalist, who worked with John Board, polo and equestrian correspondent, on The Times, eventually taking over from him.   Her fame in the horseworld rested mostly on on her being a writer, so it is not surprising that her books are the most accomplished of the famous author section. She wrote books which covered most facets of the genre; ponies told their own stories; there was holiday adventure, and also romance, with Clear Round, probably her best known book as it was reprinted in Collins Pony Library series in the 1970s. Heroine Fiona goes to a training centre which also taught the domestic arts: not only could Fiona muck out, she could arrange flowers. And fall in love with the son of the centre’s owners.  I had this book in my own collection: I enjoyed it rather more than my first encounter with romance. This was inadvertent: my local toy shop had Barbara Cartland’s The Pretty Horsebreakers. It had a horse on the cover: I bought it. Not quite what I expected. 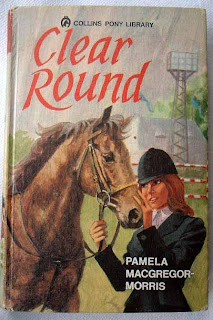 I have a book coming out later this year on pony books - you can follow me on Facebook for more on how that's going. AND there's 40% off all 1950s horse books on my site

madwippitt said…
Some here I didn't know about!
I was hooked on the Pat Smythe Three Jays books when I was younger and I still remember the disappointment when I discovered they weren't real ...