The 1950s saw a massive increase in the number of pony books published. The war was over; rationing was coming to an end. We had never had it so good, so Harold Macmillan said. The welfare state was becoming established, employment was high. The 1950s pony book reflected the spirit of optimism of the age: they were set in an Arcadian Britain that had never existed, but perhaps, now, it might. In this post war world, riding was becoming ever more popular. In 1934, there were 103 Pony Club branches, with a membership of 8,350. By 1952, Pony Club membership had increased to 18,905, with 201 branches. PONY Magazine, started in 1949, was well into its stride, and was read by people who had no pony, nor any hope of it either.


The Pullein-Thompsons were now fully in their stride, with the Josephine’s Noel and Henry series, Diana’s Augusta and Christina,  and Christine’s Chill Valley Hounds and Phantom Horse all appearing in this decade.


The Jill series was now joined by other pony series fiction. This was variable in quality. Mary Gervaise, best known for her school stories, which she had been producing in a pretty much unbroken run since the 1920s, began her G for Georgia series with A Pony of Your Own (1950). The most pony-orientated of her books, it took a genre in decline – school stories – and slapped the coming one on top of it. The series is an odd one in several ways: although billed as ponies and school, most of the books are set outside school, and there is little traditional pony adventure. Mary Gervaise doesn’t do gymkhanas. She does do outsiders, and family life, and that is what the Georgia series gives the reader; that and ponies as friends. 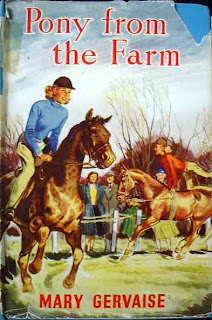 Mary Gervaise was joined as a series writer by Judith M Berrisford. She had been a regular contributor to Pony Magazine, and had produced a range of pony stories like Timber (1950), Sue’s Circus Horse (1951) and Red Rocket (1952)which tended towards breathless adventure. With Jackie Won a Pony (1958), she started one of the lengthiest British pony series (now overtaken by Pippa Funnell’s ghost-written Tilly series). Jackie Hope wins a pony in a magazine competition, and instead of picking one of the lovely ponies she is shown, goes for a grey Welsh pony she sees pulling a cart – Misty. Unlike most ponies pulling carts in pony fiction, Misty is not ill treated. This sets the tone for the series: Jackie’s world is a safe and comfortable one, through which she crashes with her partner in disaster, her cousin Babs. In holiday adventure after holiday adventure, Jackie and Babs rush in, full of honest good intentions, and end up infuriating those around them. Everything works out in the end: these stories are safe, comfort reading. 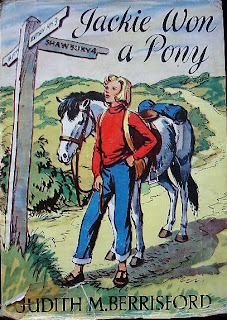 Towards the end of the decade, Pat Smythe started producing her Three Jays series. Pat Smythe was an immensely accomplished rider, who won a bronze medal in the Stockholm Olympics in 1956.    This was the first year in which women had been allowed to compete with men. In previous Olympics, Pat’s horses had been selected but she was not allowed to ride them. Her horses did not do well for other riders and they did not compete. When Pat rode them, they won. She was brave, a wonderful rider, well turned out and never grumbled. She was a heroine to ponymad children, and they bought her Three Jays series in droves. It was a clever marketing concept: all fans long to know more about their heroes, and the Three Jays series allowed the reader to imagine herself in Pat’s world. It was set in Pat’s home and stables, with her horses and staff, with the addition of the three fictional children: Jimmy, Jane and Jackie. 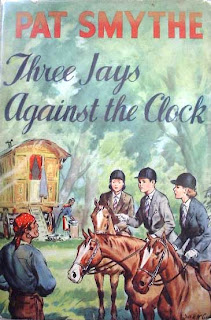 Georgia, Jackie and The Three Jays were all reprinted several times: but the Three Jays did not survive beyond the 1960s. When Pat retired from show jumping, and married, there was no longer the magnetic pull of her celebrity to enliven the books. They remain an insight into how Pat rode and thought.


I'll write more on the 1950s next week. And quite probably the week after that too.


If you'd like to read more about how the pony book began, I've written on:
I have a book coming out later this year on pony books - you can follow me on Facebook for more on how that's going. AND there's 40% off all 1950s horse books on my site for a week from today (1st June 2012).

Christina Wilsdon said…
What a fun year for pony and horse books...Forrest's book, yours, and I just saw a NY Times horse-racing blog entry about a biography of Eclipse and the people around him. Yay!
1 June 2012 at 15:29