Were you to analyse how many pony books have been published over the last decades, and when, the 1950s come out on top. Geoffrey Trease said “In those days you could have sold Richard III if you had given it the right wrapper and called it A Pony for Richard.” This is unfortunately true.  Out of the many, many pony books which were produced in the 1950s, a lot were entirely forgettable.

The picture was not all bleak:  publishers’ need to fan the flames of pony book desire led them to import several American series. Mary O’Hara’s Flicka series had already arrived in the 1940s, and has remained in print ever since. It was followed in the 1950s by Marguerite Henry’s historical horse fiction, Walter Farley’s Black Stallion series, G Rutherford Montgomery’s Golden Stallion books and any American book publishers thought they might be able to sell. In some cases they were wrong: Eunice Young Smith’s High Heels for Jennifer (1966), Dorothy Lyons’ Copper Khan (1952) and Joan Houston’s Jump-Shy (1959), despite their success on their home turf were not wild successes in the UK. 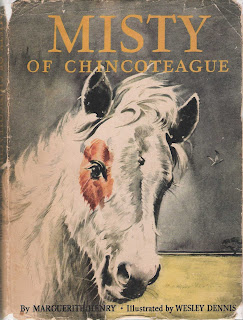 Home-grown pony book authors leaped with huge enthusiasm into pony adventure. They were not alone: the post-war years saw many children’s authors following where Arthur Ransome had led with his Swallows and Amazons series. Their stories of dashing, but ultimately safe, adventure caught the mood of the post-war generation, providing cosy escapism in a world still reeling from the effects of the Second World War.  Perhaps you needed that mood to lend the books enchantment. Colonel C E G Hope, editor of Pony Magazine, and reviewer of pony books for its pages, is endlessly enthusiastic whenever a new M E Atkinson appears on the scene. He mentions her in the same breath as Monica Edwards. Atkinson's books never seem to disappoint him. I have struggled to get through every one I have tried.

Adventure thundered through book after book: pony book families met kidnappers and circus ponies in Catherine Harris’ Marsham family adventures; Kathleen Mackenzie took her Pentire family off on a whole series of adventures which were badged as pony stories, but in which the ponies were peripheral. Lorna Hill introduced the stern and at times frankly disturbing Guy, a romantic hero perhaps better suited to the Mills & Boon romance than the pony book. 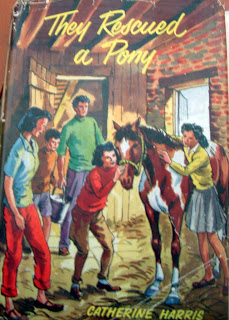 There were adventures with more bite: Patience McElwee produced three holiday adventures in Match Pair (1956), The Merrythoughts (1960) and The Dark Horse (1958) which introduced a distinctly adult perspective to the pony book world. Her Pony Club camps were hotbeds of snobbery, not jolly learning experiences. Veronica Westlake produced in The Unwilling Adventurers (1955) a book in which the heroes had to be forcibly booted out by their father in order to have an adventure. Her The Ten Pound Pony (1953) includes a foil-the-robbers plot which is the weakest part of the book, but includes a wonderfully observed and sparky family who genuinely struggle with money. They are not pony book poor. These children really slog to afford their pony. 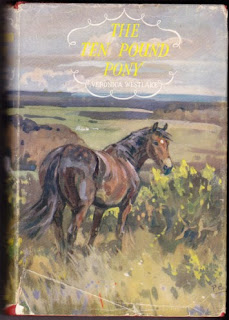 Neither author’s books saw many reprints, save for The Ten Pound Pony. Perhaps they were a little too raw; too realistic for an audience that wanted, understandably, to escape.

I have a book coming out later this year on pony books - you can follow me on Facebook for more on how that's going. AND there's 40% off all 1950s horse books on my site.

madwippitt said…
Whetting my appetite for The Book!

Although I do hope you were referring to struggling with E M Atkinson, not the wonderful Monica Edwards books ...
9 June 2012 at 22:44