The latest thing in Pony Books 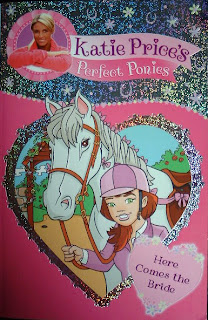 I've just been sent a set of Katie Price's (aka Jordan) journey into children's books: they're called Katie Price's Perfect Ponies, and well, they're pink. They are aimed completely shamelessly at girls: the covers are bright Barbie pink with silvery trimmings and a sub-Bratz character on the front.

Katie Price I know does have horses of her own, and she knows her stuff. Random House, the publishers, have a Perfect Ponies website, and the pony care tips are accurate and sensible. The stories themselves are written competently enough (as always with these celebrity books, I do wonder who did the actual writing) but without any sort of heart - nothing to really engage the emotions, or attract you to the characters. Interestingly, the most popular character at the moment on the website is Cara - who is a nervy biscuit who doesn't like going fast or jumping, and the only one who is memorable for anything other than the way she looks. Even so, Cara's big blue eyes crop up quite often, and what with Jess twirling her thick brown hair, and Darcy's plait being so long she can sit on it....

The only thing that emerges from the sludge is the insistence that one can be glam and still horsey. And isn't there enough stress on girls to look good already? Neat and workmanlike was how I was supposed to look when I was a horsey girl; at least when I was with the ponies I was well away from my parents' insistence that I "make the best of myself", and school's hawkeye inspection of you to see if you were up to getting a Deportment Girdle (No). In these books, Vicki, the owner of the riding stables "smiled, revealing her perfect white teeth. With her slim figure, thick dark hair, tanned skin and stunning silver-grey eyes, their teacher was living proof that you could be glam and still be a brilliant horsewoman." [Little Treasures] And of course you can, but not when you're 8.

The illustrations don't help. Dynamo Design, who were responsible, have gone all out for cuteness. They have sub Bratz heroines, ponies from the dumpy Plasticene school of modelling and a complete disregard for accuracy. The riders' toes are all pointing firmly downwards, the saddles are utterly unlike any saddle I've ever seen; there are ponies being groomed loose, and standing there cheerfully in their stables with wide open doors. As of course they do.

There are four titles in the series at the moment: presumably more are planned. Books for young readers don't have to be like this: there are some fantastic American titles - Jessie Haas' Runaway Radish - funny and instantly recognisable, and K M Peyton's Scruffy Pony - with the angst of wondering if the heroine will actually get her act together and rescue the pony who is so in need of it.
Review

Mutterings and Meanderings said…
I'm afraid I shuddered when I saw these books and couldn't believe it when Horse & Hound did an interview witht he lovely Jordan to promote them.

BTW, my Grey Mare stands loose in the stable when I'm grooming her!

Jane Badger said…
Ah, but maybe not loose outside the stable..... with other ponies looking on from stables with wide open doors. And I have to admit I used to groom Phantom, loose in the field, so it's more do as I say than do as I do. I missed the article in Horse and Hound. The Daily Telegraph have an article appearing tomorrow on pony books, which does touch on these books, and I don't think it's going to be positive.
13 July 2007 at 10:03

Susan in Boston said…
What a pity they've ruined a great little book like Runaway Radish with bad illustrations....Margot Apple's artwork was perfect for the story (and reminded me a bit of Anne Bullen's work)
16 July 2007 at 20:25

Jane Badger said…
Is that a new version of Runaway Radish? The one I knew had lovely illustrations. A while back I imported a selection of American pony books, and Radish was among them. How dreadful if it's been spoiled. Do you know why the illustrations were changed?
17 July 2007 at 10:39

Susan in Boston said…
My fault..I think I misunderstood your post re Runaway Radish being released in this series...my assumption was that they were going to make it pink and sparkly a la My Pretty Pony (ewww!). I certainly hope not, as I too loved the original illustrations.

Re Jessie Haas..keep an eye out for her Working Trot(1983)...one of the best ya books of somewhat recent vintage, sadly already out of print, about an 18 year old young man training for dressage...same topic as Caroline Akrill's 1985 Flying Changes, but a very different book (both great books, luckily they don't duplicate one another at all)
18 July 2007 at 21:47

Jane Badger said…
I'll definitely look out for Working Trot. I really like Jessie Haas - it's a great pity she's not better known over here. As far as I know only her "Can I Get There By Candlelight?" has been published here.
20 July 2007 at 11:42

Susan in Boston said…
Can I Get There by Candlelight is a Jean Slaughter Doty title..I'm shocked to hear she was published in the UK at all! The Crumb and The Monday Horses are usually considered to be Doty's best books....both take a frank, and not flattering, look at professional show jumping, from a middle grade point of view.

Both excellent reads..The Crumb is easy to find and cheap (and could well be an entry in your bucket of tears category), The Monday Horses has a few less tears, but takes a lot more effort and money to obtain!
23 July 2007 at 18:44