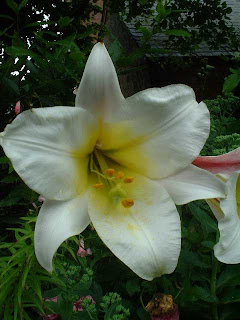 A few years ago I bought some lily bulbs: I've always loved lilies, but struggled to grow them when we lived in London because of the lily beetles. Despite frequent night raids on them they had the better of me. So, I thought, after a few years had passed and dulled the pain, I'd try again. I bought some Madonna Lily bulbs, read the instructions, carefully dug holes, made little sand beds for the bulbs and sat back and hoped. In the spring, the lilies poked little green heads above the soil. Every day I went out and inspected them, and soon they were about 5 inches tall.

One day I was looking idly out of the landing window, which overlooks the garden, and saw a squirrel (the grey kind of course). I don't like squirrels at the best of times: ours ate enormous amounts of bird food - and by the way if anyone tells you the way to deal with squirrels is to feed them, don't listen. If you feed them they just bring their mates to join in the bounty - dug endless holes in the lawn and swore virulently at me everytime I dared to go into the garden. But I digress. I looked out of the window, and the fiend, the monster, was digging up my precious lily bulbs. I hammered on the window, screaming with rage and then shot outside. Of course I was far too late; and the squirrel sat in the apple tree, clutching its booty. And the worst, the absolute worst thing, was that it didn't even like them. It hurled the chawed stalks down at my feet. I was a broken woman.

Two lilies did survive the onslaught, and this year, 3 years after I planted them, I have flowers.
garden