After a detour round male horse book authors, and an author interview, and fancy dress, back now to my history of the pony book.

The 1960s was another productive decade for pony books; at least as far as the number published went. Many authors active in the 1950s kept on writing: Mary Gervaise and Judith M Berrisford added to their series fiction.  Neither the Georgia not Jackie series opened gates to new pastures. Georgia carried on having secure, family-based adventures; Jackie infuriating every male with whom she came into contact.  Gillian Baxter and Monica Edwards both continued writing, and Mary Treadgold contributed the first two of her Heron series (The Heron Ride, 1962 and Return to the Heron, 1963). 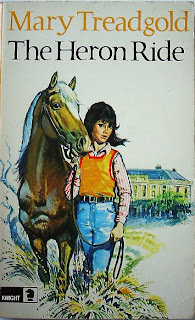 Not all authors continued as before. The Pullein-Thompsons had, after the early 1960s, a collective break from pony books, possibly inspired by the fact two of them had families. Diana Pullein-Thompson wrote a few non pony children’s books in the early 1960s, but no more pony books until 1974 and The Hermit’s Horse.  After All Change (1961), her fine story about a family challenged by change, Josephine Pullein-Thompson wrote no more pony books until the 1970s. She wrote non-fiction titles like Learn to Ride Well (1966) and short stories for the Pony Club Annual, but also, following in her mother’s footsteps, adult detective fiction.  Christine continued writing pony books in the early 1960s, but after The Doping Affair (1963), she wrote non-pony children’s fiction, though keeping up her production rate. She wrote 17 children’s books in the 1960s.  The lack of new Pullein-Thompson pony fiction was to some extent obscured by the appearance of much of their back catalogue in the newly-popular paperback format. 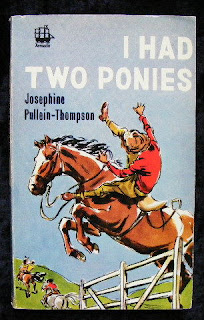 There were developments in the 1960s which would, in time, dramatically affect the pony book. Readers like series; they like to know what happens next, to characters whom they already feel they know. Publishers were obviously aware of this: advertisements for the Jill books in the 1950s and 1960s proclaim first and foremost that the current book is the next in the series. The one downside to this is that authors can generally only write so much in a year. In America, the Stratemeyer Syndicate had solved that problem. They came up for an idea for a series, an author name, and commissioned several writers to produce it, thereby getting over the production problem. The writer of the Wikipedia article on Stratemeyer puts it neatly: the aim was “to produce books in an efficient, assembly-line fashion and to write them in such a way as to maximize their popularity.” Epic series like Nancy Drew and the Hardy Boys found a ready market.

The British pony book was not yet produced in this way, but the first experiment was made. Peter Grey churned out his Kit Hunter – Show Jumper series for World Books. The stories were formulaic, and took heroine Kit Hunter, champion show jumper, on dramatic adventures all over the world. 12 books appeared between 1959-1961, a rate of production previously unknown in the pony book world.  It was not until the 1990s that comparable series emerged, but by the first decade of the 21st century, the majority of pony fiction was series-led, and issued several titles at a time. 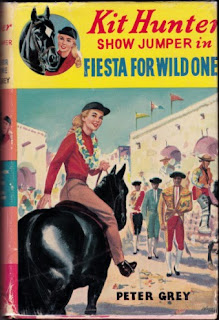 One way round the lack of series titles was to badge different titles together. In the 1940s, publishers Country Life tried this with their Junior Country Life Library, a uniform edition of their animal titles. If a child could not collect titles by an author, they could collect books in the same style. The first specifically pony orientated collection was introduced in the 1960s by Lutterworth. Their Crown Pony Library saw titles being issued from 1958 to 1975. Sadly, their titles were mostly written by second rank authors like Elinore Havers and Catherine Carey, producing more of the competent but uninspired pony adventure so popular in the previous decade. 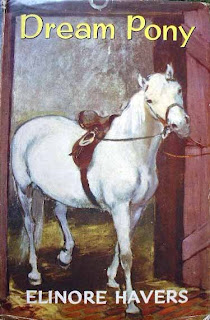 But what was there that was new? C Northcote Parkinson’s lunatic Ponies Plot (1965) combined talking ponies with space travel, in a twist on the girl-gets-pony motif: here ponies attempt to get girls. Vian Smith wrote several fine equestrian novels set in his beloved Dartmoor, with a set of heroes and heroines at the edges of society; the only common factor being their love of horses. Helen Griffiths also looked at the love of horses; her The Wild Heart (1963) and The Wild Horse of Santander (1966) both address what freedom means to wild horses and those humans that love them.

At the end of the 1960s, probably the finest writer of British horse stories, K M Peyton, took the pony story to a new level with her Flambards series and Fly-by-Night (1968). K M Peyton, who started writing as a teenager, publishing three books under her maiden name, Kathleen Herald, is particularly good at passion: not just the passion that people feel for horses, but for each other. Her historical series, Flambards, sees orphan Christina shipped off to her live with her uncle and cousins. Each of them is an obsessive in their own way: her uncle and older cousin  Mark with horses and hunting, and her younger cousin Will with flying.  Her Uncle, whom we gather has never been a temperate man, is vicious with frustration now that an accident has prevented him from ever riding again. He despises his son Will for what he sees as cowardice, and only wants Christina so that she can marry Mark and bail out the family fortunes with her inheritance. Christina has to negotiate this minefield of violent family relationships, and work out her own opinions on a society and family which are rapidly changing. 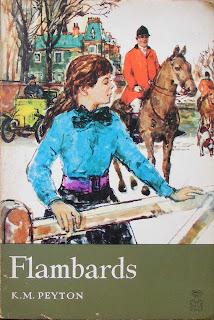 The second book of the series The Edge of the Cloud (1968) won the Carnegie Medal (though ironically, it features far more aeroplane than it does horse), but it, and the series, set K M Peyton on a path which has produced some of the finest horse stories.

madwippitt said…
So much nostalgia ... I remember reading in disbelief when Will got killed off in Flambards, and having a bit of a snivel ...
A friend recently gave me a DVD set of the TV Flambards, which we used to race back to our mobile home to watch after work - the horses got tucked up for the night rather hastily on Fridays. We loved the series then, and it's still very good.
3 August 2012 at 20:06

callmemadam said…
Not entirely relevant, but. Early this morning on Anneka Rice's radio show she was praising Mary King, then said that as a result of watching her ride, she'd gone to bed the night before with Jill's Gymkhana.
4 August 2012 at 10:16