Maggie Dana's website
Thank you to the author for sending me a copy of this book.

Riding for the Stars is the third in the Timber Ridge Rider series. In the first, Kate McGregor gets a job as a companion to Holly Chapman, who has lost the use of her legs after the car accident in which her father died. Kate has problems of her own: her mother died, and her father has parked her with an aunt who is not particularly interested in her. Kate also has a guilty secret: she believes she has caused the death of a horse, and so has given up riding. Now, in book three, Holly is able to walk again, though it's still a struggle. Kate's riding, is still living with Holly and her mother Liz, and there's a new excitement: a film is to be made of teenage hit book series Moonlight (yes it is a thinly disguised Twilight), and the director wants to employ a girl rider from Timber Ridge Stables to act as a stand in for the star, who not only can't ride, but is afraid of horses. The job will pay $1,000 and Kate is determined to get it. If she does, she'll be able to put the money towards realising her greatest dream: a horse of her own. 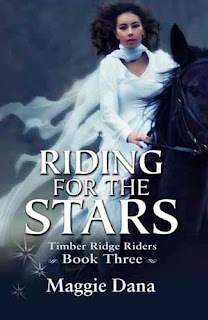 If you just read that plot summary, you might well assume that you know exactly how the book is going to end up, and the thing is, it does, but it's how it gets there that makes this book such a worthwhile read.

I liked book two, but I really liked Riding for the Stars. Maggie Dana is not a lazy writer. It's tempting when you have a villain to make them utterly vile; satisfactory from the reader's point of view as an easy-to-hit hate figure, but from the point of view of an ultimately satisfying and convincing read, not. It's Maggie Dana's portrayal of Angela Dean, Kate's enemy, that I really enjoyed most about this book. We know why Angela is as she is: she has the ultimate in pushy mothers, who combines the desire to push her daughter forward at every possible opportunity with lambasting Angela every time she doesn't meet her impossibly high standards. It's as toxic mix. Angela is desperate for friends, but has no idea how to make them. Her method of welding a new acquaintance to her is to boast about what she's got, and ally that to an attempt to convince them everyone else in the vicinity is not worth bothering about.

There is a particularly poignant moment in the book which sums up the awkwardness, and difficulty, of negotiating relationships. All the members of the Timber Ridge team (apart from Angela) are discussing going out for a trail ride.

“Okay, who’s coming for a trail ride?”
Everyone chimed in with a yes. Except Angela. She’d retreated to the doorway and was leaning against it, clutching her script and trying to look as if she didn't care. Kate felt an unexpected surge of sympathy. She knew what it was like not to have friends. The girls at her old riding stable had expensive horses and wealthy parents. Kate worked there to earn her lessons. She mucked stalls, cleaned tack, and groomed horses. The other riders tolerated her because she made their team look good by winning blue ribbons. “Come with us,” she said.
There was a stunned silence.
Angela’s face flushed pink. Her eyes glittered. Kate couldn’t tell if it was tears or a trick of the light. “I’m going to lunch,” Angela finally said, pushing a strand of hair off her face. “With Uncle Giles.” In a flash, she was gone.
“Phew,” Robin said. “That was a close one.”
“Yeah,” said Jennifer.


This doesn't mean that there's some misty-eyed rapprochement in which Angela Dean is saved by the love of a good horse, and a girl with her head screwed on the right way. Angela is very hard to reach. She is genuinely unlikeable; she always fends off advances with unpleasantness, and wants nothing more than to get one over on Kate. She's not particularly fussy about how she does it.  But Maggie Dana makes the reader, like Kate, feel that little tinge of sympathy and understanding for Angela.

She's also good on the general daffiness which goes with being a teenager: Kate is still prone to those moments which have the reader on their knees, pleading with her not just NOT to do what she is planning, because it will not go well: the bottle of bleach is NOT a good idea. Holly's crush on Adam, and her gradually awakening relationship with him is beautifully done; particularly when Adam finally comes to meet Holly at the stables, only to be met by a crisis as the horse Kate's riding in the film, Magician, is missing. So Holly doesn't get her daydream meeting with Adam in a field of daisies with her wearing a floaty dress; she's in a panic and wearing a green top that makes her look like Kermit the Frog. Kate meets the teen hero actor of the film and has absolutely no idea who he is - why would you when all you read is horsy mags?

It's the observation of her teenage characters that Maggie Dana does so well: and it's here that the real interest and craft of her books lies.

That is not to say the story is not involving, because it is. I read it on the Kindle App (a  first for me but needs must as I am getting more books to review in that format) and I kept clicking through those pages. There's a neat little plot twist to get you salivating over the prospect of book four: Kate finds Magician in the woods, with a neglected mare who appears to be owned by a local hermit. There's something about the mare that speaks to Kate....

Riding for the Stars is a fine read. The series gets better and better as it goes on. If you'd like to know more about the rest of the series, I've reviewed book one Keeping Secrets and book two Racing into Trouble.

Author Giveaway
Maggie Dana is very kindly offering three e-book versions of Riding for the Stars. Add your name to the comments by 4th August to take part.

Aimz said…
Sounds like a decent series, will keep an eye out for them :)

Can e-books be read on normal laptop or do you need a tablet device /kindle? Sorry bit behind with technology lol
2 August 2012 at 14:23

Unknown said…
The plot sounds as though I would enjoy reading it. I have a teenage daughter and know just how she can be. Who knows, it may become her favorite series. :)
5 August 2012 at 00:35

Jane Badger said…
Aimz - you just need one of the free apps. All the major e-readers do one.