By the 1980s, the number of old titles being re-published in paperback obscured the fact that the number of new titles published had plummeted: only half as many were printed in the 1980s as in the 1960s.

This was the decade that saw the publication of Michael Morpurgo's War Horse (1982), though it made little impact at the time.  The new authors who appeared in the 1980s tended to produce the standard pony adventure that had been so popular over the preceding decades. Jo Furminger carried on her Blackbirds series, the adventures of a group of children and their ponies, and her daughter Justine Furminger contributed two books of her own: Bobbie Takes the Reins (1981) and Bobbie's Sponsored Ride (1982). Wendy Douthwaite wrote about girls and their ponies. 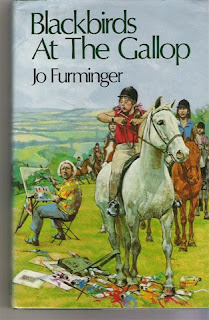 And what of existing authors? Patricia Leitch finished off her Jinny series, with the last volume, Running Wild, appearing in 1988.  The Pullein-Thompsons were all still writing. Christine mostly stuck to adventure, adding new titles to the Phantom  Horse and Black Pony Inn series. Diana wrote a series about a dealing yard, and Josephine wrote more of the Moors series, before returning to triumphant form with another instructional series dealing with the Pony Club: the Woodbury Pony Club series. 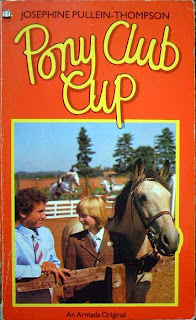 But children's literature as a whole was changing. Middle class children had been the kings and queens of children's books, but, from the 1960s, books appeared which reflected very different backgrounds. Authors like Leila Berg started to write books which moved away from the comfortable middle class world of Janet and John, and showed one where houses had no internal water and children played on dumps.

In the 1960s, Berg wrote the Nippers series for Macmillan. There was outrage from the schools and local authorities sent advance copies of the series:  this world could not exist.  Housing reports produced at the time proved that it did.   Children were suddenly presented with a vivid picture of the world they actually lived in.  Leila Berg found, reading her book in schools: “"I was having to read through laughter all the time, continuous, constant laughter, not ordinary laughter. The children were hugging themselves and jumping up and down, hugging their neighbours in this warm, physical, clutching way. As I watched them they were getting loose and limp in front of me. I was quite shaken."

All children need to read about their own worlds, and a change was long overdue. However, as critical opinion swung behind the new movement, a corresponding move arose against the perceived elitism of some children’s books. Pony books were an obvious target. Only if the reader had money would they be fully able to enter the world of the pony. The working class hero of the pony book was almost vanishingly rare; her ascent to the pony-owning world maybe a dream too far.

But the dream of ponies is not particular about whom it afflicts. For the vast majority of us, owning a pony was never an option, but we lived the dream through books. Critics may not have approved, but the strong minded, independent rider was still out there, if in smaller numbers than before.  Caroline Akrill’s fine Eventers series (Eventer’s Dream (1981), A Hoof in the Door (1982), Ticket to Ride (1983), brought Elaine, pursuing a career in eventing against all the odds, and the wildly eccentric Fanes, her employers, to the pony book world. 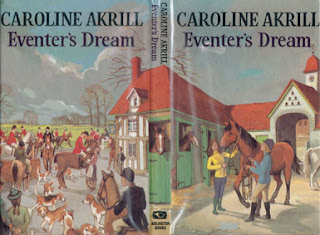 Caroline Akrill was an important figure in the pony book world of the 1980s and 1990s. Her Flying Changes, (1985) gave critics all the anguish they could desire. Its hero, Oliver, is a dressage rider, whose perfectionism and ruthlessness drive him to destruction. Publishers Arlington were aghast when Caroline delivered the book.  In an interview with me, Caroline said:   “It was far, far darker when it was delivered to Arlington Books.  They were simply horrified by it because it was not at all what they were expecting... They took out all the darker bits.”  Whatever the publishers thought, Oliver’s teenage readers loved him. One wrote: “I look for him everywhere, everywhere I go, every show, every dressage event, I look for him. I just know he’s there somewhere.’

Caroline Akrill became a publisher, working for equestrian house J A Allen. They were known for publishing non-fiction, but Caroline introduced a children’s fiction line, the Junior Equestrian Fiction series: a well-written set of books aimed at the teenage reader. Despite covering difficult topics like rape (Susan Millard’s Against the Odds, 1995), suicide (Akrill’s own Flying Changes, reprinted in 1989) and illiteracy (Diana Pullein-Thompson’s This Pony is Dangerous, 1990), libraries would not stock what they saw as elitist fiction. 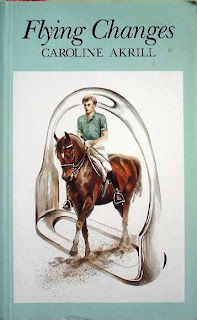 The J A Allen books were a rare excursion into more challenging fare for the pony book.What the pony book world acquired instead was series.

madwippitt said…
Yippee another book post! Really looking forward to reading yours when it appears.

As for Caroline Akrill: my writing hero. I used to buy Pony but couldn't afford other horsy mags too, so used to stand in the newsagents, thumbing through the pages to the Akrill show reports and stories and then have to try not to draw attention to myself by falling over laughing.