Bits and pieces and a parsnip forest

- July 04, 2011
The equestrian test event is on in Greenwich Park at the moment.  There are not many moments when I regret having moved from Charlton (next door to Greenwich) but now is one of them.  Here's Fran Jurga with a full report on what's happened so far.

Like Susanna Forrest, I long to have a go at side-saddle.  Susanna has, and here's her lovely blog piece on it.

My idea of War Horse the movie would have been Tim Burton plus the puppets from the stage show.  Failing that, it's Stephen Speilberg, who seems to have some misgivings himself on his use of real horses.

I have a vegetable patch on what was our muck heap.  The theory is that I grow stuff up there that doesn't need a lot of horticultural input; potatoes, garlic, onion, and parsnips (note nod to the Oxford comma which I am experimenting with having been taught  it was a Bad Thing.  Now questioning this assumption).   I am supposed to go up to the muck heap once a week to check on what's been happening.  I haven't been for a while, and when I have gone, have not looked in the direction of the parsnips.  This is what's happened to them now: 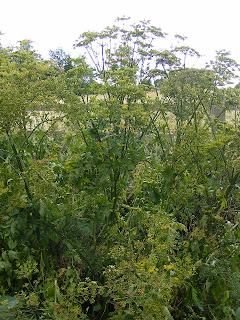 They are taller than me.  Goodness knows what's going on underground.
garden Random stuff

Jane Badger said…
It's what's going on underground that's worrying me. Do parsnips just carry on getting bigger, and bigger? Or do they throw off little side parsnips? Or large side parsnips? Or take up their roots and walk?
4 July 2011 at 12:30