Amazon from the other side of the fence

- July 11, 2011
Amazon is phenomenally successful, which begs the question - why?

From the consumer's point of view, Amazon is a good thing.  Prices are (generally) low, choice is phenomenal, you can return anything for any reason.  With Amazon's feedback system the buyer is in control:  the buyer can say pretty much what they want, and if an Amazon seller isn't any good, this should emerge soon in the feedback.  Amazon feedback and the seller rating is a fine method of keeping sellers up to scratch.  If a seller's feedback is bad, sales will slip.

Amazon's business practice is pretty much like that of the British supermarket.  It provides what the customer wants, and the customer keeps coming back.

"Customer service from Amazon is always pretty good as a buyer. I buy non-book items there. When [my husbsand] first got his ipod he was having problems with the download software for buying MP3s from Amazon and the help page asked if he would like a phone call to help him. He clicked yes and the phone went straight away. All sorted out with speed."

"I buy paperbacks from  Amazon when I can't find them in local shops or I am in a real hurry. I find the service by Amazon  itself to be very good, books do arrive on time and when there are problems they have a helpful and no quibble return/replacement service, including the time a neighbour signed for my parcel but forgot to pass it to me. Only problem - their packers seem to think any new book will do and sometimes send pbs which are less than perfect, but if you complain another copy is sent, the indication being that the books themselves are so cheap for them it just doesn't matter."

Matters are not quite so good in the Amazon Marketplace, which is its platform for sellers with secondhand or rare books to sell.   As I wrote in previous blogs, many booksellers have to sell on Amazon in order to survive, but they share a pond with poor practice and inaccuray.


"Marketplace, which I only use if nothing else is available, is a right lottery and you have to read feedback carefully. Books can be terrible 2nd hand on there."

"My experience buying from re-sellers has been much more mixed and I usually try to avoid it, partly because the description is often generic and the packing unbelievable, (single layer plastic bags, tight string marking boards etc); slow too. This means I do take notice of feedback in my decision making ......"

Does Amazon really care about the secondhand book side of its business?    It is very difficult to compare like with like.  I tried looking for a first edition of Casino Royale, by Ian Fleming.  What I wanted was the first edition hardback, which is a very, very expensive book indeed. This is what came up: 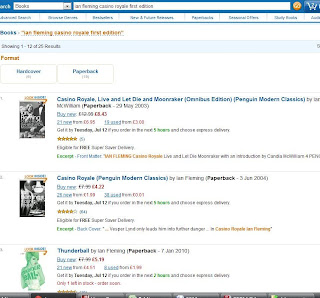 I tried hitting the hardback tab.  It didn't help. 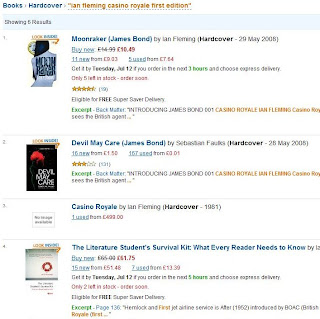 I gave up, and decided to try a children's book, Enid Blyton's first Famous Five title, Five Go on a Treasure Hunt. Amazon had several copies of the hardback reprint available (though no first editions as far as I could see).  Amazon has a great many sellers who sell enormous amounts of books through them, providing not one whit of a description.  Take this example, with sellers with similar feedback ratings:

In the first example, you don't know for sure whether you're even getting a hardback, let alone whether it has a dustjacket, is ex library, or has names and addresses all over the first blank page.  There are many large sellers on Amazon who use this sort of generic description.  Sellers get no credit from Amazon for providing the sort of informative and concise description the second seller uses.  I know which I'd rather buy.

Inaccuracy is rife on Amazon.  I tried looking up a book I know well in all its editions, Ruby Ferguson's Jill's Gymkhana.  Amazon have, according to it, over 30 copies of this book in the paperback edition published by Knight in 1977.  The picture shown in the example below is, however, the paperback edition published in 1968.  Amazon's insistence on each book being entered under its actual year of publication leads to multiple listings (3 pages of them in the case of Jill's Gymkhana).  If you were to enter your book under the correct heading, it would not appear at the top of the listings, which is where most people will look.  So sellers don't enter their listings where they should be: fine if you're not bothered about what edition you read, but very irritating if you are. 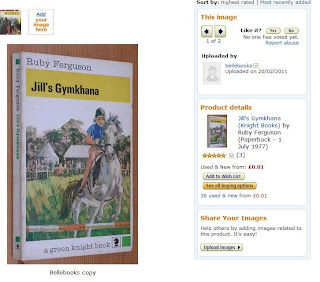 When I wrote last about Amazon and its service to the buyer, I said that what Amazon did not provide was personal service and depth of knowledge.  Author information and bibliographies were short on the ground.  Since I wrote that, Amazon has made an attempt to plug that gap.  Here's Amazon's page on Ruby Ferguson: 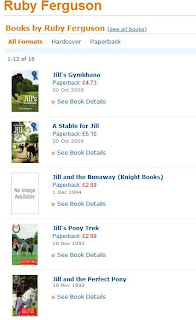 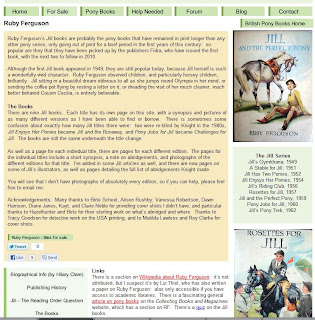 So what is a bookseller to do?  Take a leaf out of the small food suppliers' book, I think.  One bookseller said to me:

"The plus for both ebay and Amazon is the feedback system for all its faults. I think this is why, along with choice and price, we struggle with our own sites. People are so wary of buying from someone they don’t know. I think social networking helps to a balance that out a bit. If you tweet or blog you become a person out in the internet."

I think that seller is right:  booksellers have to make strenuous efforts (and it is hard work) to appear as an individual, and not hide behind piles of cataloguing.
Amazon