- June 01, 2011
Jane Smiley – Secret Horse
Faber & Faber, 2011, £6.99
Jane Smiley’s website
Secret Horse is the sequel to Nobody’s Horse, which I reviewed last year.
Abby’s father is still horse dealing; Abby’s still at school and working with the horses in what passes for her spare time.  The major difference between this book and the first volume is the relative serenity of it all.  In the first book, Abby had problems.  School was difficult, to say the least.  Here she remains the detached, slightly passive girl she was in Nobody’s Horse, but there is far less exploration of the family dynamics and friendship difficulties in this novel:  the assumption seems to be that we’ve read the first book and therefore understand about the family and their faith, and how they operate, and Abby seems to have reached a harbour where she's accepted what is going on in her life.  There’s almost no family angst in this sequel, and Abby seems to fit in better at school now, though she’s detached about that too.  You almost forget that this child can feel, particularly if you have taken on board the blurb on the back of the British edition. 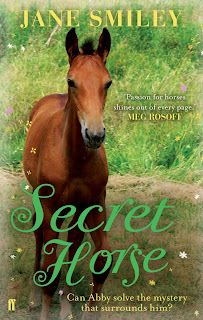 “What secrets surround the little foal?” it asks.  “Can Abby solve the mystery before it’s too late?”  It’s a fairly common plot device in the horse story:  a beloved horse is claimed by someone else, who may well have a better claim than our heroine.  Here, a detective is investigating whether or not Abby’s foal, Jack, was born to a stolen broodmare, in foal to a successful and fashionable stallion.  In a conventional horse story, the beloved horse being threatened would lead to the heroine having frantic meetings with her friends, who would then devise various fantastic schemes for hanging on to the horse, and that’s what the blurb leads you to believe you’re going to get.
Abby is simply not like that.  As far as I can see, she does not even mention to any of her friends what is going on with Jack.  She barely even discusses it with her parents, but watches and waits for the next development.  Solve the mystery she does not.  This habit of watchfulness is probably why she’s so good on a horse:  she rides Black George by managing to let him get on with jumping, whilst restricting herself to placing the horse properly.  It’s quite a surprise when Abby develops a fear of jumping once the jumps go past 4 feet.
But Abby can feel.  The part where Abby realises Black George is going to be sold is beautifully written.  If I could write something as good as this I would be beyond happy:

had a beautiful face, Black George, with a quiet eye and quick ears - he flicked them back and forth in order to keep track of what was going on, but nothing worried him.  His best feature was his mouth - smooth, long lips, just relaxed, because he didn't wrinkle them all the time. As we walked, I stroked his nose."

wanted to love this book, but I can’t quite.  Secret Horse lacks the dramatic pull of the first book, possibly because there’s less conflict between the characters and less to involve the reader.   It’s a nearly book.  Some of it is spellbinding.
Note:  this book has been re-titled for the UK market.  The original title is “A Good Horse.”
Review

Anonymous said…
I didn't like this one nearly as much as the first one. I found the bits about the training of the colt got a bit repetitive and 'preachy'; almost list like.
Sarah
3 June 2011 at 11:44

Jane Badger said…
I didn't mind the training bits too much. I did wonder if Jane Smiley was contracted to write a series, but American publishers don't tend to be as series-obsessed as British ones, and I would have thought she's a major enough author for the publishers not to be calling the shots. If a series was what she contracted for, I do wonder if her heart's really in it.
6 June 2011 at 13:41

LyzzyBee said…
I've finally read this and I did like it, and thought the training bits were well done (at least they were correct!) and showed the progress and learning process. I enjoyed the bits about her school friendships and the bits about the relationships with the the horses were so well done.