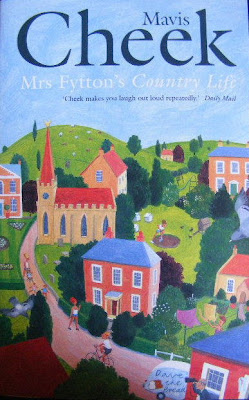 It is about Angela Fytton, who married young, and dedicated her life to raising her family, and working with her husband to develop his business, waiting only for the point when the children left and they could enjoy being with each other. However, Ian Fytton had other ideas, and left her for Binnie, a dentist who provided him with a baby. The book opens with Angela's negotiations as she moves out of London and into the country. She has a misty, romantic vision of country life and the Dignity of Honest Toil, but beneath all that is a cast iron determination to get her husband back. Her teenagers are 17 and 18, and she knows perfectly well the last thing they will want to do is move out of London to live with her, stuck out in the middle of nowhere. So where will her little darlings go? To live with her husband, his new wife, and their baby.
Those of us who live with the especial joy that is the teenager will know just what a brilliant revenge this is. My friend Charlotte described the experience of having teenagers as the best contraception you could wish for. No romantic dream that is a second marriage with a new baby could possibly survive the galloping self-obsession, the utter conviction that you, the parent, know nothing, and the swirling storms of emotion the teenager drags with them through life, could it?
And there Angela sits, in the country, watching it all as she blunders through country life, and Ian and Binnie live through the full joy of having teenagers. "Good," she says. "Good."
I did, I have to admit it, love watching the uninitiated suffer. A few weeks ago I was standing talking to a friend who has 4 teenagers, when we were joined by another mother, who was complaining about her eleven year old. How old were our boys? she asked. "Seventeen," I said. "Nineteen," said my friend. "Gosh," said the joining mother. "Aren't boys the ages ours are awful?" My friend and I looked at each other, and had one of those moments when you know, absolutely know, what someone else is thinking. "Eleven is nothing," we were thinking. "The true, majestic horror that is a stroppy male teenager makes eleven look like a walk in the park." But we said nothing. We didn't disillusion her. She has it all to come.
So although I wouldn't wish it in real life, seeing Ian and Binnie reel under the onslaught brought with it a certain cruel enjoyment. Binnie, the husband-stealer, was so utterly unprepared.
Perhaps that's why the book's sold so well. Most parents suffer teenagerdom without having done (much) to deserve the sturm und drang, so seeing a couple who perhaps deserve a bit of punishment for the havoc they have wrought does have an attraction. I did like, though, the way Angela is ambivalent about what she's doing. Ian and Binnie's baby son does not deserve to have done to him what was done to her children.
And Angela is not without her troubles. Mavis Cheek writes it all so beautifully: the enthusiastic rushing into a rosy-hued vision of what country life is, and the gradual realisation (aided by a very nasty experience with mutton fat and rushlights) that country life is pretty much like any other except muddier. And smellier. She's funny, is Mavis Cheek. And sharp. I liked this book a lot. It's good. Very good.
Review

Unknown said…
Some friends of mine have three charming daughters, currently aged 5 years, 3 years, and 4 months. I can't help thinking that it might be rather different household in say, eleven years' time.
Three teenage girls might possibly be worse than three teenage boys.
24 April 2009 at 18:27

Juxtabook said…
I enjoyed this - both your review and the mild rant about the delightful teen years. My husband says he goes to work (teaching teeneagers) for peace from our 5 year old. I realise living with them is a totally different kettle of fish though. One of the worst things about teaching in a secondary school (and there are many worse things!) is the smell - really surprisingly bad.

One of the worse things about living with children as opposed to teaching them is that unlike when you are at school there is no longer someone higher paid to whom you can send the blighters when they are having an off day!
24 April 2009 at 21:01

Jane Badger said…
Gillian - I think you're right. It will be a very different household in a few years' time. I don't know if teenage girls are worse than teenage boys. I have one of each and I'm completely at a loss about which one is better (or worse).

Thanks Juxtabook. I do know what you mean about the smell. I'm not sure what is worse: the great wafts of lynx, Impulse and the like, or the generally unwashed. Or the combination.

As for what they're like out of parental sight, it's the Kevin and Perry thing - instant charm to someone who's not family, and hell on legs to anyone they're related to.
27 April 2009 at 13:00