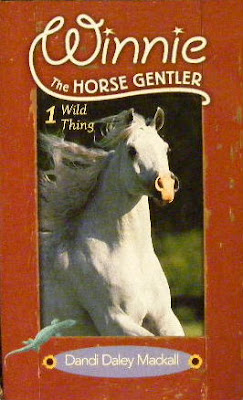 I have had this book hanging around for over a year now in my to-be-reviewed pile, which is rather slow going even for me, the High Priestess of Prevarication.
It's an American book, part of a series of eight titles. I did wonder, what with the exchange rate falling and all, if the book was going to be horrendously expensive now, but having looked it up on Amazon it's actually considerably cheaper than when I bought it. Something going right for someone, presumably.


The title is not, I have to admit, one that filled me with a lot of confidence. It sounds like something Jill's mother, Mrs Crewe, author of such gems as Barbie Brightsides, would have written. Added to that, my acquaintance with the Horse Healer genre so far, in the shape of the Heartland series, hasn't been overwhelmingly positive.
There are similarities with Heartland, which predates it by a couple of years. WTHG's heroine, Winnie, lost her mother in a tragic car accident, which she sees as her fault, as they were on their way to see a horse Winnie wanted to look at, which is pretty much what happened to Heartland's Amy. Winnie and Amy both have that Magic Touch With A Horse Which No One Else Does. They have some difficult family relationships.
Dandi Dalely Mackall is not Lauren Brookes (she's one person, for a start). Her heroine, Winnie, who is 12, is not written as a conduit for storms of emotion. Winnie is written as a girl who's having a hard time, but she is sparky and on occasions funny (does Heartland ever do humour?) and she is believable.
Both books though do have an agenda. Heartland's is a marketing one, rather than a literary one. It's written to appeal to the widest possible number of teenage girls and present them with wish fulfilment. The Horse Healer series also has an agenda, but it's a Christian one.
This is not immediately apparent when you start the book. It opens with a statement I imagine a lot of us will have sympathy for:


"My mom used to say, "Winnie Willis, in the beginning God created heaven and earth and horses. And sometimes I have to wonder if the good Lord shouldn't have quit while he was ahead."

The mentions of God come in quite small-sized portions: Winnie's sister Lizzie, a few pages in, calls something "a king-size God thing", at which I began to twitch slightly, and then Winnie talks about praying - or at least trying to pray, because she's found this hard since her mother died. At that point my antennae were twitching a lot. I have a stereotype alive and living in my head: one where the whole intent and purpose of a book is as an evangelical tract of the more whoopee variety of American Christianity, and the author's faith is going to be rammed down my resistant throat. Oh no, I thought. I am going to be clobbered relentlessly about the head with fundamentalism, and goodness me, I'm an Anglican! I don't DO fundamentalism - and I don't really like stories that are a vehicle for something else. Either a story succeeds on its own merits or it doesn't.
Well, prepare to ditch your stereotypes of what an American Christian pony book is like because this one is good. I found the bits of the book where faith is mentioned entirely believable, and actually pretty much what my own experience of faith is. Despite the fact Dandi Daley Mackall comes from a very different tradition of Christianity to my own, I think there is still a huge meeting ground (now isn't that a classic Anglican thing to say?)
Winnie talks to God in much the same way that I do - chuntering on would be an apt way of describing it, I think. She does have obvious and huge problems with God after the death of her mother, and I guess that's why we see her two years down the line from that death, at a point when she might be willing to think about God again.
If you are not a Christian, I don't think that you would have huge problems reading this book. Although Winnie's gradual recovery of faith is important to the book, there is far, far more about her relationships with her sister and her father, and with the new people she meets in Ohio, and of course plenty of action with Wild Thing, the Arabian mare. All of these relationships change over the course of the book.
The story itself is a fairly conventional one: girl meets horse, overcomes its trouble and off we go into the sunset, but the book does place Winnie in a slightly more unusual situation than normal. After her mother's death, Winnie's father cannnot stand to be in the same place for long, and they have moved five times. Winnie and Lizzie are desperate to try and put down some roots and not move again, and this insecurity is the focus of the story.
Dandi Daley Mackall's strength is in the portrayal of the characters. They never become cardboard cutouts, moved around to prove a Christian point. She sketches them in deftly, and leaves enough unresolved issues in the story for you to be intrigued about how they will work out in future stories. The one exception to this is the villains of the piece, the Spidells.
Winnie is trying to earn money by working as a mucker out at Stable-Mart - a large operation which is as much livery by factory farming standards as you can get, and owned by the Spidells. They want to churn out horses who win at shows, rather than look at how the horse actually functions.
It's a very easy thing for an author to label characters as villains, and then that's how they stay, labelled forever as the ones you boo and hiss whenever they stomp onto the book's stage, trailing their many wickednesses about them. I hope that in further books the Spidells are allowed to grow a few half-way decent traits, or at least show some movement towards realising there is a different way, even if they turn away from it.
The other quibble I had with the book was the time limit Winnie has in which to gentle the mare: a week. I lost a bit of belief here: I find it difficult to believe that an Arabian mare who is described as basically bonkers, unapproachable by all (except for Winnie of course, and then only with care) is going to turn right round in a week, but I suppose anything is possible. It's just not very likely.
Despite that, I liked my first taste of this series. The book works as a story. It's well told. It's certainly an excellent antidote to the shop-till-you-drop antics in Chestnut Hill.
Review