This is another one that's been in the to-be-reviewed pile for over a year now: which does mean that I can add another layer to my collection of negativity over how behind I am with the reviews - guilt, because this is a very good book, and I have kept it to myself all that time. 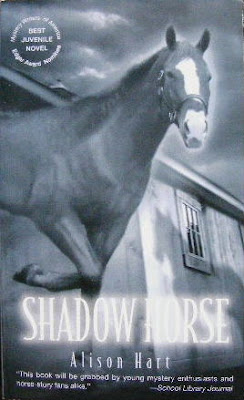 It opens with 13 year old Jas facing a courtroom and being prosecuted for assault on the owner of the High Meadows farm, Hugh Robicheaux. Until the assault, this is where she lived with her grandfather, who worked for Robicheaux. Jas found the mare Whirlwind dead, poisoned by eating yew, and her grandfather, who has since had a stroke, has been accused of negligence by allowing the yew to be in the paddock. Jas, however, is sure that Hugh Robicheaux has killed the mare deliberately and blamed her grandfather.
Jas is very much alone at the beginning of the book: Hugh Robicheaux is powerful, and she is just a 13 year old girl. She is convicted, put on probation, electronically tagged and sent to live with a foster carer. Even Diane Hahn, the foster carer, seems to have a connection with Robicheaux. Miss Hahn does, however, have horses: she runs Second Chance Farm, a rescue centre. Jas is a girl on a mission, determined to prove that her grandfather is innocent and that Hugh Robicheaux did kill Whirlwind. At first she is prickly with everyone, including Chase, a teenager who helps at the Farm. She is not, however, lily-white - she has absorbed more than she realised of the attitudes of High Meadow: horses are only worth having if they are beautiful and win things.
Jas does come to see that there are other ways of looking at things, particularly when she persuades Diane Hahn to buy Shadow, a horse suffering from a thyroid condition, at the local sale. There is a lot more to Shadow than meets the eye, and so the mystery goes on.
It's an incredibly absorbing book. The shenanigans of Hugh Robicheax are slowly unfolded, against the background of Jas thawing out and learning to like and trust Chase and Diane (a bit more than like in the case of Chase), and of course there's plenty of equine rehabilitation too. My sympathies were with Jas - although she's pigheaded, she's a likeable teenager and the pigheadedness is part of her charm.
The one quibble I have with this book (which was an Edgar Award Nominee for Best Juvenile Novel) is that there is no sequel. The book is all set up for it: there are plenty of plot lines to be developed. Hugh Robicheax is not brought to justice, though they're close. But there is no sequel. It is a book absolutely crying out for the next episode.
Alison Hart isn't immune to writing series: the Riding Academy series is one of hers, she's written several of the Linda Craig series, and she's also written a series for older children set during the Civil War. I'm really not sure why she's not gone on with the story. She has an immensely likeable heroine in Jas, a little light romance, an absorbing mystery, and some excellent equine action. If you were to put this book against others in the rehab genre: Heartland and Winnie the Horse Gentler, it wins hands down. As a crime fiction title, it succeeds too. I've read a lot of whodunits, and the plot turns in this one had me glued to the page. I read it again just before I did this review, and it was if anything even better the second time round

M said…
Alison Hart was one of the main writers for the Thoroughbred series under her name Alice Leonhardt. Those books were kind of crazy, especially hers. This one always seemed superior, so I also questioned why she never wrote a sequel.
28 February 2009 at 20:08

Jane Badger said…
Mara, is that kind of crazy in a good way, or a bad way?!

The thing that puzzled me about this book is that it's written as if the author had a really strong idea about where she was going to go with it: plenty of strong plot lines but then bleurgh - nothing.
28 February 2009 at 22:44

M said…
That's a good question, actually. Some of Alice's Thoroughbred books were crazy bad (Christina's Courage, Dead Heat), but some of them were crazy good (Living Legend, Star in Danger). She wrote a bunch of them, and you never really knew what you were going to wind up with.
2 March 2009 at 18:38

Jane Badger said…
That's interesting. I've just been reading up about the Thoroughbreds series. The only one I've come across before was by Karle Dickerson (The Forgotten Filly) and I wasn't that keen. I'll try and get one of each of the good and bad. I'm intrigued now.
2 March 2009 at 20:16

M said…
Ah, know that The Forgotten Filly was actually not a Thoroughbred book. It was sort of taken over as this "Ashleigh Collection" thing that really wasn't related at all. Karle Dickerson did write a few Thoroughbred books, and she had her own hits and misses. (Also know that when I say "crazy good" in terms of Thoroughbred, there's also a significant amount of "wow, what was that all about?" tossed in as well. ;) ) I love the books, though.
3 March 2009 at 01:29