Review: Victoria Eveleigh - Joe and the Race to the Rescue

- March 14, 2014
Joe and the Race to the Rescue is the last in Victoria Eveleigh's Joe trilogy. I thoroughly enjoyed the first two, and the last is a great read too. What I really like about this author is the sense of community that she puts over in her books.  You're always aware her child characters are just a part of the community: they don't, like some children's books, exist in convenient isolation, but are influenced by the people they meet, and the relationships they have with everyone they know: young and old. Parents, friends, their families, local farmers, travellers: they're all there.They are really rich in character: Eveleigh is a non-judgmental writer, and she never resorts to lazy stereotypes.

In this book, Joe's outgrown Lightning, and has another brilliant games pony - Fortune - on loan. Fortune, however, is not the same pony Lightning was. Not at all, and Joe can't seem to work out how to ride her. Fortune is beginning to frighten him. 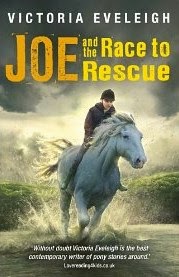 Help comes from an unexpected source: at his aikido class, Joe learns to visualise calm. From his traveller neighbour, Nellie, he learns that horses live in the moment, and that Fortune needs to learn to trust him. Slowly, and carefully, Joe and Fortune begin to build their relationship. Fortune emerges as a real pony, not something who's the vehicle of Joe's wants and desires. Victoria Eveleigh always writes a very good pony, and even ponies like neglected Solo, who only makes a brief appearance, are captured so well you feel you could walk down to a field, and there they'd be.

This book isn't afraid of including the unusual. Joe meets two Shires: Velvet and Sherman, at a ploughing contest, and he becomes fascinated by them, particularly when he goes with Chris, the local farrier, to help out when they're shod. He learns to drive the Shires - I particularly loved the scene where Joe is wrestling with the octopus-like masses of harness, and struggling to remember what everything's called, and where it goes. His fog mirrored my own.

It's great to see Shires emerge as real and meaningful characters in a pony book. If they're mentioned at all, it's in passing, as no one's quite sure what to do with them. Victoria Eveleigh used to use Shires to run tours over her Exmoor farm, so lack of knowledge isn't a problem for her.

This is much more than just a pony story: Victoria Eveleigh focuses on more than just horses. The descriptions of the other things Joe and his friends do: fishing and aikido, and the first stirrings of romance, as well as school, means that using a boy as a main character in a pony book seems thoroughly natural, as it should be. She never writes books where parents are conveniently dispatched at the beginning of the book, leaving her characters conveniently alone to have adventures. This makes adventure, when it does come, all the more realistic. Britain has had truly horrendous flooding this year and last, and when Joe's father remarks cheerily that the flood defences will hold the river, as they head off out for the evening, you know it won't.

The adventure is dealt with thoroughly realistically. There is a satisfying ending: indeed, the whole book is a satisfying read. I look forward to whatever Victoria Eveleigh's going to do next.

Sue Howes said…
There were so many things I liked about this book it's hard to know where to start.
But the idea of connecting with your horse is so well written in it; this is something I am beginning to explore in real life and I could almost feel it happening to Joe while I was reading the book. This is powerful writing, but never preachy.
I also really liked the character development over the three books. Children do grow up in bursts and the reader can see this happening to Joe and his sister. And the ponies! They are all brilliant, I particularly enjoyed Lightning, and the slightly batty ex-racer/broodmare.
Lovely lovely stories and I can't wait for more :)
14 March 2014 at 11:30