- March 07, 2014
The Silver Brumby paperbacks which appeared in the 1970s are some of my favourite pony book covers ever. For me, they capture completely everything I loved about the books: the horses in them are beautiful, and free, and utterly part of the landscapes they're galloping through. You simply can't imagine them in a field. I still have my copies of the paperbacks, and they've survived remarkably well, particularly in contrast to some of my other books. This I think was because they happened along a bit later in my pony book reading career, when if I liked a book I read it incredibly carefully so I didn't spoil it. I can still remember reading them at a squinty sort of angle, desperate not to crease the beauty of the covers.

I loved the stories too. Apart from Black Beauty, the Silver Brumby series were the only books I knew in which the horses actually talked. I was completely convinced by their world: the wise mares Mirri and Bel Bel, and their lively colts Storm and Thowra. The author wrote about the mountains in which the Brumbies lived in a way that made me see them. The whole wealth of life: animals, birds and plant life is there. I had a fairly loose idea about some of them, not all of which are illustrated, so had pictures in my mind which must have rivalled some of the oddities you see in Medieval illustrations of peculiar animals.

Man was an occasional intruder into the books, but one who always represented capture for the horses, and almost always danger. Man in the series is grasping, wanting the horses only as trophies, or to prove the brilliance of man's trapping abilities, and it is a rare being who is content to let the horses be.

The Silver Brumby, Thowra, is never captured, and dances through the series, outwitting man and protecting his herd, until he too dies. My Silver Brumby though is the inquisitive foal, outpacing the vicious Arrow, a horse imbued with the qualities of the human hero: bravery, kindness and wisdom.

The books do not flinch away from the realities of life on the mountains. Horses fight, are wounded, are captured, and die. An image that has always stayed with me is that of Bel Bel's bones bleaching on the mountains. I never found this a sad or upsetting idea - to me it seemed right that Bel Bel should remain out on the mountains she loved. 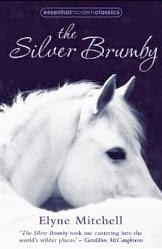 
The Silver Brumby has been published many times, and there are many Australian and American editions besides the ones illustrated above. It was first published in the UK by Hutchinson in 1958, with a cover by Ralph Thompson. The book was republished in 1962, with a rather undistinguished photo cover which gave the reader little idea that the book was fiction. Dragon Books produced the first paperback version in 1969, with a striking, red-backed cover by Peter Archer. The same artist is also credited with the later, 1973 version - a spectacular difference in styles. Collins issued the book in 2011 as part of its Essential Modern Classics series, and it is still in print.

For more on the author and her books, she has a page on my website.
PBOTD Year of Pony Books