I really enjoyed this. If you follow my blog, you will know I didn't like the first two volumes of this series, The One Dollar Horse and Race the Wind, and I wasn't expecting to like Fire Storm. In the previous volumes, I've had issues with unlikely plot lines and what seemed to me dodgy characterisation. I will just say that it is of course crashingly unlikely that someone will achieve the Triple Crown before they're 18, which is the whole point of this trilogy, but let's just leave that aside. The pony book is all about wish fulfilment, and this trilogy achieves that. After all, one of the earliest precursors of the genre, Velvet Brown, did win the Grand National. And she wasn't even 17.

Fire Storm opens with heroine Casey Blue being unable to ride Storm, who is still recuperating from his Kentucky experiences. She's riding a mare she's been loaned, Lady Roxanne. The mare doesn't like Casey, or anyone very much at all. She'll jump a course one day, and dump Casey the next. Casey's instructor, the eccentric but switched on Mrs Smith, starts Casey on the road to understanding the mare, but it's uber-instructor Kyle West who tosses out a couple of nuggets to Casey which she thinks really do the trick. And Kyle is several things Mrs Smith isn't: young, male, and devastatingly attractive. 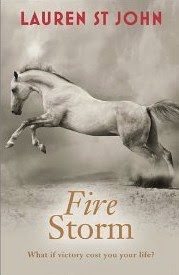 I felt for poor Mrs Smith, whose illness it turns out is terminal (though she survives until the end of the book), and who suffers more when Casey has a strop and storms off to be trained by Kyle. Casey does, of course, eventually get to Burghley, the third event she needs to win in order to win the Triple Crown, having already got Badminton and Kentucky under her belt.

Anna, villainess of the first book, makes a reappearance, but she's changed - no cardboard villains here. I like the way she and Casey dodge around each other; neither quite sure of what the other really thinks. The author's moved beyond the obvious characterisation that dogged her other books, and has created a story which hangs together brilliantly. There was one brief occasion when I thought we were going to veer off into sub Dick Francis shenanigans, but the crisis was averted. The tension in this book comes from the drama that surrounds Casey naturally: her relationship with Mrs Smith, her attraction to Kyle when she's still in love with boyfriend of the first two books, Peter, and her struggle to form a decent riding relationship with her new horse.

The equine detail in this book is very strong indeed: Lauren St John has the knack of imparting her considerable knowledge without being either didactic or dull. If you want to know about the current state of eventing, read this book. It's peopled with real-life characters: Mary King; Pippa Funnell; Andrew Nicholson et al, but they're a natural part of the story, and not names flung in simply to impress. Lauren St John has created an impressively realistic slice of eventing life.

The ending certainly comes as a surprise; but the answer to what Casey does next is thoroughly satisfying.

janebadgerbooks said…
I do sometimes wonder when I'm reading reviews if I'm reading the same book everybody else is, so I guess this is a classic example! I agree with you over the unlikeliness of the ending. I did wonder if it was as a reaction to some of the criticism of the first book, which swooped away from the very good and believable picture of trying to ride in inner city London to typical horse-set drama. I guess as that's a particular peeve of mine, I was willing to take that as another element of fairytale (in reverse, maybe - the princess is usually far away from her horrible origins, and not the reverse).
20 March 2014 at 09:07

Kate Lattey said…
Just after I posted this review, I headed up to the Horse of the Year show and spent the weekend with a friend who was riding in the CCI 2* 3-day event. I happened to mention this series and she had a good laugh at the premise and said it would be impossible to qualify to compete at 4* level in two years, no matter how talented your horse is. Especially if the rider is only 17 and has never competed at that level either! Considering most of the top 4* horses competing at the moment are in their mid-teens. The weekend was a great eye-opener though for the sheer amount of work that goes into keeping an event horse sound and happy - my friend's horse pulled up slightly sore after the cross country, so it was off to the onsite vet for a check up, then a massage, bioptron light therapy, ice, poultice and linament on his legs, followed by walking him out in hand every couple of hours (including at 10pm in the dark), up again at 5am to work on him with another massage, and then all fingers crossed at 9am for the trot up - which he passed with flying colours. Phew! The XC was great though, usually at Horse of the Year the eventing section is held off the main showgrounds, but this year it ran right through the middle, including through the main arena (and it was the first ever cross country in the world to require horses to gallop through the VIP tent!). Most of our events in NZ don't garner huge crowds so it was a great opportunity for our horses to get exposed to a big atmosphere as the whole show stopped for the XC to be run through the middle of it all! Here's a bit of video that I got of Kate's round on her lovely 12yo TB Felix - not the prettiest jumper in the world but incredibly quick and light on his feet, so super safe going XC. Kate has owned him for two years now, she has just turned 21. https://www.youtube.com/watch?v=u4GQQKYoKoQ
24 March 2014 at 10:06

janebadgerbooks said…
I loved watching that - thanks. She's a great rider to watch, and I was so impressed by the way she took that table fence (not sure if that's what it's called). Yes, I agree that the whole premise of LStJ's series is not exactly realistic. I think that's what I objected to in the first book: it starts with this great picture of riding in inner city London, and then moves to something far more conventional. I did like the fact the series comes full circle and the heroine goes back to her roots. It's a question, I suppose, of just how much fantasy you're prepared to entertain!
25 March 2014 at 09:32

Kate Lattey said…
You're welcome! Glad you liked it, Felix is a pretty cool horse :) And yeah, we just called it a Tabletop. It was HUGE! Back to the books and I agree that the premise is unrealistic, although that's a great challenge as an author, to take something that unrealistic or that seems cliched and to make it work and feel real. I felt like the first book had more touches of the real world than the last one did. And I loved the opening, when she imagines riding around Badminton and is really on a fat hairy cob that will hardly move. Very relatable. (There is a great French and Saunders video that does something similar!) I didn't feel like things came easily in the first book, but by the third one it was just a matter of sitting there and pointing Storm at the jumps, and that to me glossed over the technical aspect of the sport too much. I also felt that the characters were too cliched in this one - I could see through Kyle and his ruse from the get go, and I was disappointed that Anna ended up back where she started. (And the whole "I couldn't possibly accept the win and all that money because it wouldn't be morally right" was ridiculous, in my mind.) There were a couple of parts of the book that I did like - dealing with the difficult mare, and Casey being decent to Anna despite their history (though this was very uneven as they would both go from being nice to being horrid at the drop of a hat) - both of which reminded me to get on with finishing the sequel to Dare to Dream :)
26 March 2014 at 05:23