- December 20, 2013
Today it's the turn of one of the very earliest pony books. Joanna Cannan, mother of the Pullein-Thompsons, wrote A Pony for Jean in 1936. Jean and her family have to leave their expensive London life for a cottage in the country, after her father loses his money. As was to be the case for most pony book families, poverty was relative, and didn't mean scrapping along on the breadline.

Jean finds she's living quite close to her cousins, for whom money is no problem at all. They have a pony they don't ride - Cavalier, and they give him to Jean. Cavalier, when she gets him, is underweight and rather neglected, but Jean manages to rehabilitate him, and teach herself to ride with remarkably little fanfare. Joanna Cannan, unlike her daughters, never went in for loving descriptions of schooling. Indeed, in one of her later books, Gaze at the Moon, the re-schooling of Air Frost is skipped over: "I will not describe how we schooled Air Frost because it is all set out in books on how to school horses and really it was very simple..." Whether this was a dig at her daughters I do not know.

For Christmas, one of Jean's best presents is a proper hoofpick, which is a major step up from the screwdriver she had to use before.

"I found an orange, and a tangerine which I ate, and a little paper bag full of acid drops, and then, right down in the toe was the best thing of all - the proper tool for picking out horses' hoofs. I was awfully pleased because up to now I had had to use a screwdriver." 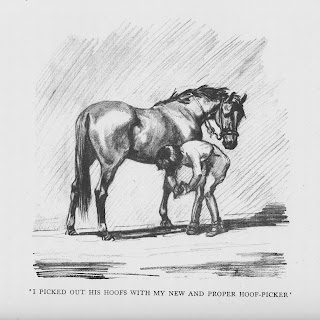 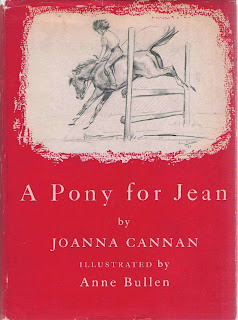 You can read more about Joanna Cannan here.

Read more about the pony book in Heroines on Horseback, my survey of the world of the pony book from the 1930s onwards. There's a whole, long, chapter about the Pullein-Thompsons, with biographical info, and analysis of their books. You can buy a signed copy from me (I'll post them worldwide). The book's also available from the usual sources, or your local bookshop.
Advent 2013