- December 14, 2013
Today's pony book is Alan Smith's Snowy. Snowy is one of those pony biographies that were so popular in the twenties and thirties. It's the story of a Welsh pony whose fortunes decline, until he is rescued. Alan Smith is better known as the former equestrian correspondent of the Daily Telegraph. 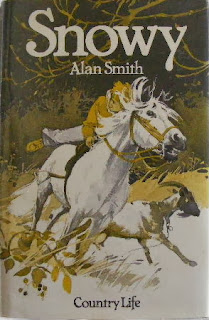 You can read more about Alan Smith here.

Read more about the pony book in Heroines on Horseback, my survey of the world of the pony book from the 1930s onwards. You can buy a signed copy from me (I'll post them worldwide). The book's also available from the usual sources, or your local bookshop.
Advent 2013