- December 13, 2013
Here's another of my favourites. I love the vertiginous hill in Mary Gernat's cover illustration, which as far as I can remember from that part of Surrey, isn't exactly typical, but I love it nevertheless. Monica Edwards' Black Hunting Whip sees the Thornton family moving into Punchbowl Farm, and is one of the books that sees her getting into her stride as a writer. It's a ghost story which doesn't feel like a ghost story; at least not one of the ones that leaves you too terrified to move from your chair (I am not a big reader of spooky stuff, as you can probably tell). The ghost here is almost courtly.

Black Hunting Whip is a book which has lovely Christmas scenes in it, particularly the bit where Lindsey, who's condemned to bed over Christmas after giving herself concussion, has Christmas brought to her.

"Lindey's mother brought holly and ivy and a bowl of snowdrops from the downstairs rooms to make her bedroom festive, and Peter brought one of the coloured paper balls to hang among her rafters. The wood fire crackled zestfully on the brick hearth and Andrea came up and dusted and tidied till everything was perfect.

Peter brought Sula, Tarquin and Red Clover one by one to Lindsey's wndow to show her all were well, and they were given Christmas apples and sugar lumps while she watched." 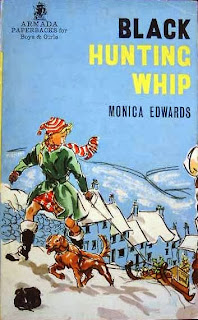 You can read more about Monica Edwards, and her Punchbowl Farm and Romney Marsh series, here.

There's plenty more about Monica, including an analysis of her books, in Heroines on Horseback, my survey of the world of the pony book from the 1930s onwards. You can buy a signed copy from me (I'll post them worldwide). The book's also available from the usual sources, or your local bookshop.