- December 18, 2013
Ah, Jackie and Babs. Whatever they touch, it all goes horribly, horribly wrong. They mean so well. Their intentions are the best. It's not always their fault that disaster strikes, but I do sometimes wonder how much the authors (for Judith M Berrisford was husband and wife team, Clifford and Mary Lewis) actually liked their creation. In today's Advent pony book, Ten Ponies for Jackie, Jackie and Babs are trying to help hapless teenager Terry run a riding school.

As part of their campaign to raise money for starving moorland ponies, they go carol singing. One of the carol singers, Dennis, decides it's as good idea to ride his pony into someone's house, and disaster ensues. Worst of all, the main opponent of the riding school is there.

"Despairingly I recognised that booming voice... She was Harriet Ridgeway very much in person!

She took off her mask as though to get a clearer view of the scene of disaster. Ponies were trampling over the hall while the Terry Lane stable supporters tried to get them out." 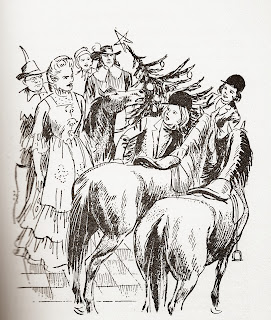 Geoffrey Whittam's illustration conveys the horror better than words ever could. Poor Jackie and Babs, and poor Terry too. Sensible adults come and run the stable, and Terry's to stay on as assistant. Realistic yes, but I always felt sorry for poor Terry, though according to his creators, he's "about the happiest boy in Britain" about the whole thing.

You can read more about Judith M Berrisford and her pony books here.

Read more about the pony book in Heroines on Horseback, my survey of the world of the pony book from the 1930s onwards. You can buy a signed copy from me (I'll post them worldwide). The book's also available from the usual sources, or your local bookshop.
Advent 2013