The Chemical Horse: a brief literary tour of colic

- July 31, 2013
Flicking through pre-war Riding magazines, I came across an article about home made preparations for the stable medicine chest - Home-Made Recipes, by Mowgli, Riding Magazine, June 1939. Everything Mowgli gave you recipes for was along the lotion and potion line: nothing internal. The one horse therapy recipe that has stuck with me for years is the turpentine plus linseed one for colic beloved of the 1950s pony book. I wondered if Mowgli hadn't mentioned it because it postdated him, so started ferreting about in the more ancient reaches of equine lit.

The veterinary arsenal of today, tested, and generally guaranteed safe, is relatively recent in the history of horse ownership. For centuries, owners relied on the home-made remedy, as that was all there was. Gervase Markham's Markham's Master-piece, (1668) tackles everything the 17th century horse owner needed to know. Much of what he writes is based on observation, and his is often spot on. He describes colic (cholick) this:

"now for the Cholick. It is a grievous or tormenting pain in the Great Gut or bag."

- which is a good and concise description of the effects of colic. Gervase Markham always likes to quote several different alternative treatments he's found, before letting rip with his own.

"The Cure thereof... is only to give him a clister made either of Wild-Cucumbers, or else of Hens-Dung, Nitrum and Strong Vinegar.."


A clister, if you're wondering, is an enema.

Markham appreciated a violent approach: you're lulled by the charm of the recipe that follows (it sounds worth taking yourself if you're in for a long night with a sick horse) and then he hits you with his master stroke. Or rather, he hits the horse:

"But for my own part, I hold it best to take a Quart of Malmsey, of Cloves, Pepper, Cinnamon, of each half an ounce, of Sugar half a Quartern, and give it to the Horse luke-warm, and then Ride him at least an Hour after; but before you Ride him, anoint all his Flanks with Oil de Bay, or Oil of Spike. Now if while you Ride him he will not Dung, you shall then Rake him, and if Need be, Enforce him to Dung..."


I don't particularly want this page to be a target for the seriously strange, so won't spell out exactly what happened to get the horse to dung, but to rake a horse, you'd need a glove now. In Markham's day, covering your hands in butter did the trick. And you then needed a peeled raw onion. Poor horse.


Tackling the blockage from both ends carried on being the treatment of choice. In William Youatt's The Horse, its History, Breeds and Management (1843), raw onions at least seem to have been left in the past. Drenches of turpentine and laudanum were the thing, followed by bleeding the horse if it wasn't better in half an hour. Again, rubbing the horses's belly was recommended, though not "the broom-handle rubbed over the belly by two great fellows with all their strength," which the author had presumably witnessed, and thankfully, disapproved of. Youatt's treatment was possibly rather more effective than another use of turpentine I tracked down in The Frank C Brown Collection of NC Folklore (1977, but collected in 1913).

"If a horse has colic, burn some turpentine in the hollow of his hoof and he will be relieved of pain immediately."


I wonder if it worked.

So, those pony books of my 20th century youth who recommended the turpentine-based colic drench as an essential of the well-equipped stable were following a well-established tradition. In Diana Pullein-Thompson's A Pony to School, (1950), the pony Clown goes down with colic and the first line of treatment is a not wholly successful attempt to drench him with a colic drink made of turpentine, linseed oil and chloric ether. The pony is successfully treated by the vet, who injects him with eserine (Physostigmine - which has a laxative affect as one of its actions). The whole incident is used, as so often with the Pullein-Thompsons, for information. The reader learns exactly what to do if a pony has colic, and useful stuff on what causes it: in this case it could have been the grass clippings Mrs Thorneydyke dumped in the paddock, or Augusta feeding the pony and watering afterwards. 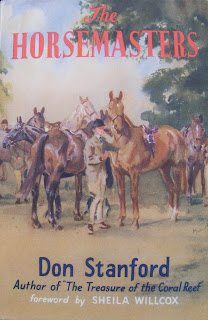 Don Stanford's The Horsemasters (1958) has pretty much the same approach, and I was struck by how very similar to Youatt's it is:

"If outside, get horse to nearest box and encourage him to stale. Throw straw against his belly and whistle, that'll help. Keep him warm. Walking exercises may help. Give him a colic drench. Hot blankets rolled up and applied to belly will relieve pain and stimulate action of the bowels. If the pain is not relieved within one hour, send for the vet."

The colic drench here is old favourites turpentine and linseed oil, with the addition of whiskey.

Colic can still be fatal now. There is now surgery for the most dreaded complication of colic, the twisted gut, or torsion of the large colon, though probably even that would not have saved the wretched racehorse James Herriot describes, given drench after drench by the stable manager, until, with the horse groaning with misery, Herriot puts it down.   Best medical practice now is to call the vet, and avoid the drench which might well enter the lungs at the hands of the inexperienced.

Sadly modern horse owners still dread colic. The Farewell to... column in Horse and Hound still contains its well-known colic victims. Modern day drugs and surgery won't guarantee a recovery. In Victoria Eveleigh's Joe and the Lightning Pony (2013) a pony dies from it.

NOTE: I'm sure no one who reads this would even think about it, but I don't recommend making any of these mixtures
up, even if you can find the ingredients. This article is written out of curiosity, not any desire to encourage you to actually make anything I write about.
The Horse - Health and Safety

Goldielover said…
I didn't realize until I saw your picture of The Horsemasters that the same author wrote The Treasure of the Coral Reef. I've had a copy of that since I was about twelve. I keep hoping someone will republish The Horsemasters - its gotten a little bit expensive these days.
31 July 2013 at 18:28

Lucy A said…
A great many of the old Aussie stockmen give a bottle of beer to colicing horse. I can't quite remember what exactly the beer does or why it works but my agistment (livery yard) owner swears by it.
1 August 2013 at 12:37

callmemadam said…
Who knew? That was really interesting. Gervase Markham was obviously king of the self help book in his day, as he also wrote a book of advice for the house wife or hus-wife as he put it.
2 August 2013 at 07:46

Jane Badger said…
He was amazingly prolific. Apparently booksellers pleaded with him not to write more on some topics!
2 August 2013 at 08:20

Jane Badger said…
Lucy, that's interesting, particularly as several of the colic recipes over the century include alcohol. I wonder what effect it had, as presumably that must be the active ingredient?
2 August 2013 at 08:21

madwippitt said…
I think it was the effervescence that was supposed to do the trick re: beer. At least that was what I was told when training many, many years ago!
Raking ... presumably where the term 'backraking' comes from then? Interesting ...
7 August 2013 at 11:27