- July 24, 2013
There's a reason Jenny Oldfield's written more horse and pony stories than any other British author: even Christine Pullein-Thompson*. She tells an excellent story. Stardust Stables is her latest series, written under the pseudonym of Sable Hamilton. 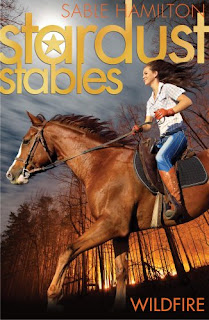 It's been out a few months now, and I admit I wasn't hustling Wildfire to the top of the to be read pile. My last experience of Jenny Oldfield was her Magical Ponies series, which encapsulates everything that is bad with the fantasy pony genre: portentous pony speak and unrealistic perfection in its fantasy creatures.

Stardust Stables is, thankfully, a world away from the Magical Ponies. Jenny Oldfield likes setting her series in America, and this one runs true to form, as it's set in Colorado. Stardust Stables provides teenage stunt riders and trained horses and ponies to the movie business. The Stables is run by Lizzie and Jack, and the riders appear to live there, at least during the summer. I haven't read book one, so can't say if they live there full time, and if they do, what happens about school. Wildfire doesn't clear up either point.

The riders are allotted a horse or pony which they bond with and ride. They train, look after the horses, and audition. When Wildfire opens, rider Alisa, 14, has just done an audition for a big movie starring teenage star Hannah Hart. The stables needs that booking, particularly as it emerges that Lizzie's ex husband Pete Mason is claiming half the Stardust Stables horses, stating that they're his share of the stables. Alisa gets the part, and at first all goes well. Alisa and her horse Diabolo perform brilliantly: far better than Lucy Reeves, Alisa's old rival who is now working at Pete Mason's stables, and who also has a stunt part in the movie. Pete Mason and his desire to seize half the Stardust horses isn't the only threat: Lucy's determined to get in on the act too, and that's when everything starts to go wrong for Alisa.

The story whizzes along at a fine rate. Jenny Oldfield is a fine plotter. If you want a challenging read which wrings your emotions, this book's not for you. Wildfire is a book which sets out to entertain, with attractive characters and horses, excitement, adventure, and a tiny dash of romance, and it succeeds admirably.

* Christine Pullein-Thompson's total of pony stories is 57; Jenny Oldfield, if you include her various pseudonyms, is currently at 62. She's written the Home Farm Twins and Half Moon Ranch series, and has also written under the names Tina Nolan and Sable Hamilton.

Win the copy I reviewed by adding your name to the comments. I'll do the draw on Monday 29th July.