- July 18, 2013
I hadn’t realised until I started reading Almost Perfect that I hadn’t read Chasing Dreams. A quick trip to the ebook store later, and it was mine (and very reasonably priced it is too).  This review will be two for the price of one as I try and catch up. 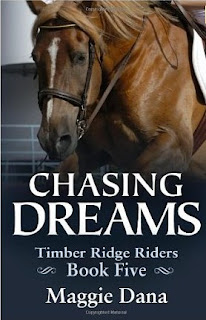 Chasing Dreams sees Kate’s father, who’s been absent in the Brazilian jungle for the past four books studying butterflies, arrive home. Kate has mixed feelings about this: it’s great to see her Dad again, but he has a new position in a university in Wyoming, 2000 miles away from Vermont. Great thinks her Dad: there’s masses of space in Wyoming, and Kate will be able to have a horse. The problem is her Dad doesn’t see why they should spend a huge amount shipping Tapestry over when there are plenty of horses in Wyoming. Potentially losing Tapestry isn’t Kate’s only problem: best friend Holly’s boyfriend is trying to organise a surprise birthday party for her, and this means lots of secretive phone calls to Kate: phone calls Holly can’t help noticing, and about which she gets the wrong idea. And then there’s Kate’s sort-of boyfriend, film star Nathan. He’s away filming in New Zealand, and Kate’s never actually had a proper date with him. Brad, on the other hand, is right here in Vermont. And he’s kind. And cute.

Almost Perfect develops the situation with Kate and her father more. They’re now living in Kate’s aunt’s cottage in Vermont. Kate and Holly want to qualify for the Festival of Horses: it’s a huge chance for them, as scouts from the United States Equestrian Team use the Festival as an opportunity to scout out riders they want to work with. Of course they’re not the only ones: their friends at Timber Ridge want to ride too, and so does Angela Dean, possibly almost as much as her mother wants her too. Between them, they ensure Kate can’t ride. The Nathan/Brad situation is still there too: Brad carries on being a good thing, and Nathan, well, he's just not there. 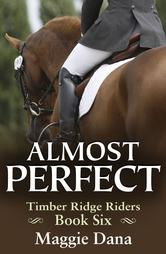 Both books are well up to the standard of the previous four.  Maggie Dana’s series works on a very small time frame. Although there are now six books in the series, they cover a matter of months - around seven. This allows the author to explore developments in her characters’ lives at length, and she does this in an entirely convincing way. Because of the time scale, there’s no need for her to rush through any of the characters’ thoughts and decisions. The great strength of these books is that you believe in the characters. Maggie Dana is an astute observer of the teenage mindset, and she draws their vacillations and doubts skilfully.

She’s also a fine plotter. Working with such a short time scale, there's a risk that the books could feel as if it's a stretch to fill them, but that's the last thing you feel. The mixture of horse, school, home and relationships is finely judged. What you get are believable slices of teenage life, and (essential for a series) the characters find their way into your affections so that you care about them and want to find out what happens next.

My one quibble with this book is Angela Dean. Maybe it’s because I read books five and six immediately after each other, but when I was about a third of the way through Almost Perfect and it was obvious Angela had been up to no good, my instinctive reaction was oh no, not again. A pattern has emerged: Angela does awful things to Kate, we see Angela’s mother being vile, Angela has a moment of despair which leads Kate to feel sorry for her, and then Angela goes right back to being foul again. Maybe book seven will see her take a holiday (visiting her stepfather?) and will let the author have a go at introducing tensions from a different quarter. Angela is the one character who seems stuck.

I’m looking forward to moving on with Kate and Holly. I am, I admit, desperate to know what Kate will do about the Nathan/Brad conundrum. If you’ve not tried any of the Timber Ridge Riders, I recommend you try. They’re all available as ebooks, so perfect for squirrelling away as summer holiday reading.