- July 30, 2013
Belinda Rapley’s Pony Detectives series is now onto its fifth episode with Foxy: Rivalry at Summer Camp. I’ve enjoyed earlier books in the series, but this is the best by a long way. The author’s into her stride now, and the plotting and character interaction have really developed in this book. Pony mysteries can sometimes feel a little contrived: the mystery is rather too obviously bolted on to the pony doings which are the book’s main focus, but in this story, the mystery flows naturally, and the book's a real page turner. 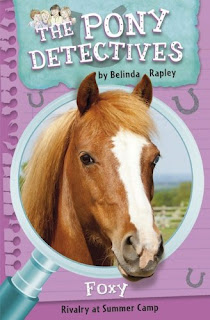 Foxy sees the Pony Detectives girls venturing out of their yard for the first time, because they’re off to Pony Club Camp. This gives the author a chance to bring in more characters, and to keep them in place for the duration of the book. It's shifted the focus more onto the mystery and other characters’ development, but that's not a problem. If you've read the previous four books you know the original characters well anyway, and if you haven't, there's enough sketched in to make them live, without making the reader feel they're having to grind through a whole load of stuff they already know.

Each book has a mystery for the girls to solve, as well as the usual pony activities. In this one, Lily Simpson’s retired competition pony, Foxy, has gone missing from their stables, which are near to the Pony Club Camp.  The four Pony Detectives girls: Rosie, Mia, Charlie and Alice are all present and correct. They’re going to be in Blue Team for the duration of the camp, along with two more girls. The other girls are Holly, who’s hiring Skylark, a pony from the local riding stables for the camp, and Amber, who is Lily Simpson’s younger sister. She’s brought her pony Copper.

Lily Simpson is the darling of the pony crowd. She’s a 20 year old New Zealander who’s the youngest ever to have won Badminton. She and her family have all moved to the UK permanently now to further Lily’s career, and she’s aiming for Burghley, which is where she is when the camp starts. And oh, how starry eyed the Pony Club are when Lily's little sister appears. The book is an amusing and neatly observed look at what goes on. No need for Amber to lift a finger – wherever she looks, there’s an eager Pony Club member, doing something for her. The attention Amber gets isn’t altogether welcome. She knows people are only really interested in her because of whose sister she is, and there’s a lot of pressure on her to be as good a rider as her sister.

Amber, and the other new girl Holly, are interesting and well observed characters. Holly has her own problems: she’s the only one who’s had to hire a pony, and Amber seems to have taken against her. When everyone finds out Lily’s retired pony Foxy has gone missing, and both Amber and Holly start behaving strangely, it adds more layers to the mystery.

There’s plenty of good pony stuff too: all the minutiae of camp life, together with lot of riding, schooling and education.


This is my favourite so far of the Pony Detectives series. Belinda Rapley’s stories have really developed as she’s broadened her canvas. This book is a satisfying and engaging read: just right for anyone about to go on Pony Club camp, or who wishes they were.

One of the comments on a previous review asked what age the book would be suitable for, so I’ve started to add info on what sort of age a book is aimed at. It’s not an exact science in the UK as we don’t age band books, and it’s not helped by the fact characters’ ages are often just a guess. Or of course I might just not have picked up what someone's age is.

Belinda Rapley: Foxy – Rivalry at Summer Camp
Templar Publishing £4.99
Also available as an ebook
Age range of main characters: not stated, but I’d guess around 10-12
Suitable for: primary age and up to 12. No romance.