- July 11, 2013
We have an ancestral pony book: it has been in the family for decades. It’s Gypsy Tells Her Story, by Leslie A Newman. I remember it in my grandmother’s bookshelves. It sat there, unread even by me, who had ferreted Charles Kingsley’s The Water Babies out of the same bookcase and read it to death, together with a good helping of my grandfather’s Hammond Innes thrillers.

Gypsy was the one book in that bookcase my grandmother actively encouraged me to read. She wanted me to read it because of its religious significance: Gypsy the horse tells her story of being ridden along the same route as founder of Methodism John Wesley on his early travels preaching, and the book is dedicated to “the boys and girls of Methodism.” I loved my grandmother dearly but this was one of the few things she and I didn’t see eye to eye on. If I hadn’t known the book’s religious connection, I’d have picked it up and read it, but I did. My grandmother never overtly told me why I was supposed to read it, but I picked up the fact there was something special about this particular book, got as far as reading the blurb, reached “the boys and girls of Methodism”, and jibbed. I was aware that I wasn’t supposed to read it just for the pure love of the thing, so I treated it with all the suspicion of a horse who has seen something nasty in the hedgerow. 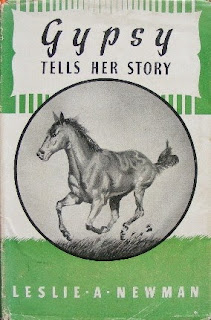 I wanted to read a book for itself, and not feel there was a message lurking which I was supposed to take note of. So, for the same reason I avoided Aesop’s Fables, with their last paragraphs full of message, I avoided this. Ironically, I was a huge fan of Enid Blyton’s Land of Far Beyond, fairly and squarely based on John Bunyan’s Pilgrim’s Progress. No one had ever “suggested” I read that though: I’d just taken it in in my huge thirst for all things Blyton, and kept on returning to it. Similarly with C S Lewis’ Narnia books: I can still remember the utter delight of reading the first one, going to the library and finding out there were six more entire books still to go.  So, it wasn’t that I objected to something with a strongly defined morality based on religion: it was knowing it was supposed to be good for me that put me off. I wanted uncomplicated delight I could discover for myself: an enchanted world, one in which yes, good triumphed but not one in which the delight was twitched aside to reveal the author had other intentions.

More on Leslie A Newman here

Christina Wilsdon said…
It looks like it has nice illustrations, based on the cover! I'll be curious to see your review of it when you do get a chance to read it. (No ancestral pony books in our family, alas, though it is in my mom's childhood copy of a very old edition of Grimm's fairy tales that I first encountered poor Falada, the horse whose head is lopped off and hung on a wall, where he continues to dispense cryptic advice to the heroine.)
11 July 2013 at 15:10

madwippitt said…
So, you still have it - but have you yet read it or is it still on the 'to do' list?

And Christina Wilsdon - that horse's head is horrific - and faithfully still included in the rewrite of The Goose Girl by Shannon Hale. But can recommend it - excellent book.
12 July 2013 at 14:37

Jane Badger said…
Ah, it's still on the to do list! Who knows if it will ever move off? Had not heard of Falada, except I think in Monica Edwards where I think it's what Tamzin wanted to call Cascade. Gruesome.
15 July 2013 at 18:17