And with a single bound

- April 15, 2011
and just one dozen riding lessons, they cleared ooh, say 5 feet? Who needs Photoshop? This ad appeared in the Christmas 1931 review of The Institute of the Horse, one of the precursors of the British Horse Society. 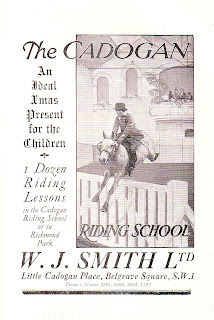 I don't know if the riding school portrayed actually was the Cadogan Riding School. If it was, it was ferociously glam. It reminds me of the glorious Marshall Street Baths in Soho, where I used to swim when I worked in the West End. It always felt like swimming in a ballroom – not that I ever have swum in a ballroom or indeed been in a ballroom at all as far as I can remember, but it was a world away from your average municipal bath.

The Cadogan Riding School (according to Joyce Bellamy's Hyde Park for Horsemanship) had 200 horses and 60 ponies, which seems an amazing number of equines to fit into central London. The Cadogan wasn't the only central London riding school either: there were schools in Gloucester Terrace, Queen's Gate Mews, Radnor Place and Connaught Mews, to say nothing of the riding schools in Hanwell and the Finchley Road, and the positive glut in Richmond, Wimbledon and Putney: nine, including an offshoot of the Cadogan.

Clapham Park Riding School laid claim in Riding Magazine, 1939 to 'the largest covered school in London'. The Riding School was at 11 Grove Road, Balham, London SW12, and a quick look on Googlemap shows something large and industrial there now. There are still riding schools in London, but only two now in Central London. It's a miracle there are any there at all, but Ross Nye and the Hyde Park Stables are still there; both just a tad more expensive than the average out of town stables, but then I don't imagine their overheads are particularly small.
The Horse - Riding Schools