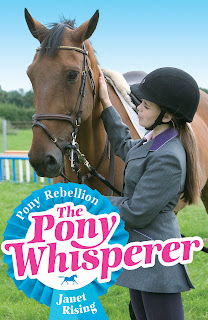 Besides this, there’s Pia’s ongoing crush on James to contend with, as well as her rivalry with Cat.  One of the series’ ongoing loose ends is tied up in this book.  Having hung on for four, and jolly nearly five books to find out what dread secret it was Cat was harbouring, I was slightly puzzled by what the secret turned out to be:  much of the dramatic tension arises because Pia’s friends won’t tell her what the secret is, though they all know.  Once I knew what it was (not going to issue spoilers, so read on in peace) I couldn’t quite see why they wouldn’t tell her.  Maybe that’s just me not understanding the sometimes opaque workings of the teenage girl’s mind.  My daughter would say it was definitely a case of that, no question.  It’s a minor quibble though; the book’s the same excellent read the others were.   There's very little in the pony book field which has ponies working to rule, unless you count C Northcote Parkinson's Ponies Plot, and I enjoyed the agony of seeing Pia completely fail to work out what was plain blooming obvious to any sensible adult (ie me).
It’s one of the great truisms of pony book stables that sooner or later they will all be threatened with Destruction; whether that’s the threat from a rival riding stable (even Ruby Ferguson’s Mrs Darcy had a minor wobble when the Drafters set up shop nearby) or the stables being covered over by a soul-less housing development, with the developer laughing all the way to the bank.
Alas you have only to look at the fate of so many riding schools over the years to know that many of them have now been concreted over:  nearly all of the riding schools in Central London are no more, the siren song of immense London property values having ensured their demise. 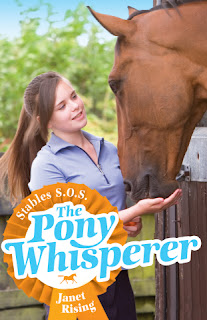 The last in the Pony Whisperer series, Stables S.O.S., sees the livery stables threatened by owner Mrs Collins’ dastardly son, who takes full and horrible advantage of his mother’s hospitalisation to attempt to sell the stables and the land for development.  Pia and her friends hope that they can stop him by proving the stables is a site of historical interest to the nation.  Alas, there is no actual building left, only the ruins the ponies can sense under their field, so they have a fight on their hands.
The book, the last in the series, is full of the things that made the rest of the series work:  although Pia can hear what the ponies are saying when she has her statue of Epona, that doesn't mean she actually listens.  The adults are as wonderfully drawn as they were in the other books: Pia’s parents are just as dim.  Her father remains sublimely unaware of what his daughter’s actually thinking.  He and his new partner plan to buy the stables once they’re converted, pleased it will bring them closer to Pia.  Pia learns that matchmaking your mother is not really a good idea, but her own proto-romance with James edges a little closer.  I like the way this is dealt with:  the romance just trickles along at the edges of the story, so it’s comfortable for girls who are happier with the idea of loving their pony than a boy, but there’s enough for the girl who’s widening her horizons.
And so the Pony Whisperer series ends; I think in a satisfying place.  I can imagine Pia and James sort of riding into the distance, though I suspect Drummer would very soon put paid to any smooching.  Pia’s father and Skinny Lynnie will carry on not quite getting it, and Pia I suppose comes to terms with her mother’s romances.  I wonder what Pia will do with herself when she’s older?   Janet Rising is planning more pony books, but Pia I think will live on just in our imaginations.  It's been a great series and I'm looking forward to whatever Janet does next (Twilight with ponies?  Just aching to be done, I'd have thought.)
Review