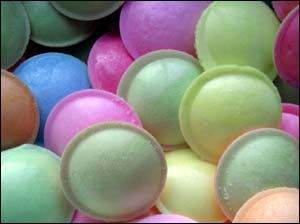 Earlier in the week my daughter bought me some Flying Saucers - which are sweets made of rice paper with sherbert in the middle. I hadn't had these for years and years; not since the days when my sister and I would trot off down the road and spend our sweet money at Tarry's. Tarry's was a tiny shop which sold absolutely everything, but the best thing as far as we were concerned was the wooden compartmentalized tray which held the penny sweets (and I'm talking 1d here, not 1p!) Mrs Tarry was the most remarkably patient woman, and would let you stand there for ages while you mulled over the delights of Fruit Salads, Black Jacks or milk bottles. We always hoped the shop would be empty when we went, as then we might be allowed into the kitchen behind to inspect the terrapins. Now you don't get that in Tesco.


A lot of the penny sweets seemed to feature liquorice, which I was never particularly keen on, apart from Sherbert Fountains, which can still be got today, and which I like to indulge in every now and then. The great disappointment with these was that the liqourice was never quite long enough to get to the bottom of the tube, meaning if you were messy and not that well co-ordinated (which would be me) that when you tipped the tube up to get the last of the sherbert disaster would follow. Another sweet that caused me a lot of grief at the time was Flakes, which under my inexpert munching would disintegrate into a thousand chocolatey particles, all equally determined to leap over the side of the wrapper. I am pleased to tell you I have got better at Flakes over the years, but think the adverts show Flakes eaten in the bath not because it is such a sensuous experience: it is the only way you can keep the blessed things under control.

I had some of my best sweet experiences in Tarry's, but there are so many things that have vanished now: to quote dear Cadbury's corporate speak:


"Consumer preferences change from time to time and as a major manufacturer it is
important that Cadbury maintain a wide range of products that are in line with
changing consumer demands."

There were large jars of what we in Northants called kayli, which was red sherbert which was quite incredibly vicious, toffee nuts, and little sherberty pips that came in red and yellow, and which you had to eat fast or they would pick up moisture from the air and stick together in an impentrable mass. And Amazin' Raisin Bars. I absolutely loved these but they have vanished without trace, victim of the corporate executioner.

Blimey. Have just googled Kayli to see if I could find any and IT IS A GIRL'S NAME now. Good grief. I wonder if there's any in Northants? Can't believe anyone here would call a child after a sweet, but then you never know. But I have just found this excellent site; I'd forgotten about Treets, and Spangles, and Texans. Really it's a miracle I have any teeth left at all.

haffyfan said…
I grew up with grandparents who owned a sweet shop so I ate far too many! Flying saucers, blackjacks and yorkshire Mixture (the fish - cause they were biggest of course) are high on my list of happy childhood memories.
23 November 2007 at 19:39

smallbutmighty said…
Gosh I rememeber toffee nuts, and pips too - though the ones I remember having were pink and white?

It's still possible to get quite a few of the traditional seets, which I find reassuring, even if we get them in the supermarket nowadays, rather than individually or by the quarter in the sweetie shop. Red Laces (which I've been messing with for more than 30 years!), flying saucers, jelly foam mushrooms, cola bottles etc.

Unknown said…
There was a little shop (Day's)close to the village junior school where we used to buy sweets. Blackjack and Fruit Salad were the cheapest; I do remember them as 4 for a penny, though most of my childhood they were 2 a penny (1/2p coins actually bought something then)
They also sold stuff by the quarter: cola cubes, aniseed balls, pinapple chunks, mint imperials, pear drops and various toffees, and plus something that was basically brightly coloured sugar (rainbow sugar/dust ?) You ate it by licking your finger and dabbing it in the little paper bag, which eventually got a bit damp and worn in one corner, and the sugar would ooze out.

I visted the Museum of Brands, Packaging and Advertizing when I was in London last year and it's very interesting. It has sweet wrappers from products throughout the 20th C, so you can rediscover stuff you used to get when you were a kid.
23 November 2007 at 21:25

Jane Badger said…
Haffyfan - grandparents who owned a sweet shop. Ooh. What is Yorkshire mixture? It's a new one on me.

sbm - now you mention it, I remember pips being pink and white too. But I do also remember them being yellow. Maybe there were variations over the years? Yes, I was impressed by my daughter too!

Gillian - yes, I remember that rainbow sugar stuff, though we did have another name for it, which I can't remember. Another colourful thing I remember is chocolate limes, which I loved at the time. Not quite sure I'd be as keen now but I'd be willing to give it a go.
24 November 2007 at 10:06

Yorkshire Mixture is a traditional Yorkshire selection of fruit flavoured hard boiled sweets in different shapes including pieces of cut fruit rock, pear drops and fruit flavoured fish. Lots of which are coated in sugar.

Re : Chocolate limes it's best to suck the hard shell and spit out the 'orrible' chocolate centre. They sell them at asda still.

you've got me going now

Jane Badger said…
Thanks for the link Haffyfan - I loved the Whirlygigs on that site, and Yorkshire mixture looked lovely. Have never ever seen it before. Funny how a few things are still local, though in the sweet shop in our village its wall-to-wall haribos now.

I forgot to say, but you can still get Wham bars.

Have discovered that Amazin' Raisin bars contained rum, which might explain why I liked them so much.
26 November 2007 at 10:31