Review: Sheena Wilkinson - Too Many Ponies

- September 25, 2013
Sheena Wilkinson's novels Taking Flight and Grounded are both aimed at the Young Adult market, so don't pick Too Many Ponies up thinking it's the same. Although the book features characters from the previous books, Declan and Seaneen are now grown up, married, and have two children, Aidan and Kitty. The family have a farm (Rosevale) for abused and rescued horses, which is run on a financial shoestring. Aidan's just starting secondary school, and the book's aimed at children of around that age. 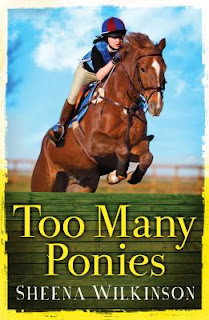 Aidan's not the only one starting secondary school: his good friend Lucy, who keeps her pony at Rosevale, is starting too. The author has a canny eye for what life as an eleven year old is like: an age when the comfortable life of primary school vanishes, and you're thrust into the maelstrom of senior school and fight to stay afloat, or not. Lucy floats; Aidan doesn't. Lucy unwittingly thrusts Aidan into the path of the class bullies, who view ponies as something pink and girly, and taunt Aidan unmercifully because he likes ponies. Aidan proves to have few resources to draw on to defeat the bullies, and life gets more and more miserable for him. Lucy, on the other hand, is seduced by the cool girls at school, who also have ponies, but who do things in a very different way to Rosevale. At Sunnyside stables, the colour co-ordinated pony is all: rugs, numnah, bandages: everything must match.

A much more direct rivalry rears its head when both stables enter for a cross country competition with a prize of £5,000: a frill for Sunnyside, but a new roof for the foal barn for Rosevale. Lucy is mad keen to compete. She's an enthusiastic, gutsy rider: Aidan, although a sympathetic rider, is terrified of jumping. Their strengths, and their weaknesses, get in the way of both of them, and how this works out is balanced well against school, competition and a thoroughly authentic horsey background.

In her earlier books, Sheena Wilkinson drew excellent male characters, and she's carried on with this one. Aidan is that alas still rare creature in pony books, the boy who rides. As Aidan himself observes, it's not surprising that the boys at school have such a negative view of horses and riding: the colour-coordinated approach of horse as dressing doll is alien to boys. There's an interesting discussion to be had on whether there should be, in the interests of equality, a bit of self-censorship on the pony dressing front. This book isn't the place to have it, but it's interesting to see it's the strength and expertise Aidan shows with the ponies that convince Aidan's tormentors to leave him alone. Perhaps there's an argument for not obscuring what really matters with horses with tinsel and tatt. Perhaps there's an argument for saying that the bling approach is sexist and excludes more people than it includes.

It is this approach, after all, which is the cause of some of Aidan's problems.

In a book which takes a good hard look at the difficulty of boys engaging in what has become a feminised and exclusive world, and which looks at how hard it is to be different to the norm and to be included, there are some slightly off notes.

It's a pity Seaneen doesn't get much of a look in in this book, having been a central figure in the previous two. Perhaps it's because in this book she's no longer a focus of dramatic tension, no longer the love interest or pregnant teenager, now she's a mother, she's unfortunately locked away from the important stuff of the book - the horses. Alas mothers in pony books can often be cyphers. Patricia Leitch's pony books feature mothers who are all oddly distant and barely sketched in. It leaves the impression that it's difficult to do the housework, have children, and attend to horses. That's left to men and children. It doesn't have to be so: look at the fine parents K M Peyton writes: Mr and Mrs Hollis, and the unforgettable Mrs Meredith (Fly-by-Night et al).

That is a minor quibble though, in a book that is a fine read. The characters are lively, brilliantly drawn, and the plot, although a standard pony competition affair, is handled so that the competition is not the whole point of the book. Sheena Wilkinson's done what the best pony writers do: keep her human characters at the absolute centre of her book.

Liz Broomfield said…
This looks excellent and is going on my wishlist!
25 September 2013 at 14:59