- September 18, 2013
Jill Hucklesby’s Samphire Song deals with grief and illness, and combines them with the conventional girl gets horse only she can ride plot. Heroine Jodie’s father, a pilot, died in a flying accident, leaving her, her mother, and her ten year old brother, Ed. The grief and gap left by Jodie’s father’s death is not the only thing they have to contend with: Ed has kidney disease, and has to have dialysis several times a week. Life is too much for Jodie, but she’s helped by looking after a horse called Rambo, who provides an escape for her as she tries to get through her days. Jodie’s dreams of horse owning come true when her writer mother gets a regular post on a gardening magazine, meaning Jodie will be able to have her first horse. 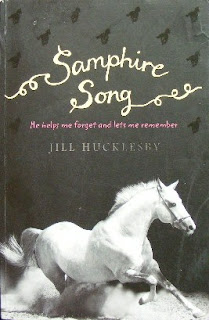 The fact this book is called Samphire Song does rather ruin the plot of the getting-the-horse section, as from the moment Samphire appears, you know that’s who Jodie’s going to end up with, not any other horse described in this section. Samphire of course is not any horse: he’s a part Arab grey stallion, and he’s three: he’s been mistreated and refuses to interact with anyone, except Jodie.  This book does fulfil, in spades the horse that only I could ride theme. Jodie does buy Samphire, and after a bit of oofing, manages to ride him, and plans to enter him in a cross country race. Then everything goes wrong as Ed becomes seriously ill, and needs a kidney transplant; Jodie’s mother loses her gardening column, and Jodie sells Samphire to raise the money to keep the family going. The rest of the story deals with the fall out from this decision.

On a human level, I enjoyed this book. The author deals with the difficult themes of grief, death and life-threatening illness well. Jodie is an engaging character, and little brother Edward is beautifully written.

Where I did struggle was with the horsey elements. There are some fairly major inaccuracies:

- a novice buys a stallion, who is taken on at the stables she works at without a second thought, and with no thought given to managing a stallion on a yard with plenty of other horses. Fortunately for the book, Samphire seems not to have heard of mares.

- the horse is three. Leaving aside the fact that it is, unfortunately, perfectly possible to buy a horse who’s been broken and ridden often at the age of three, if you buy a horse like that you shouldn’t just continue riding it, let alone plan to ride it in a strenuous race. The horse needs turning away so his young bones can grow without strain.

- the end stages of the cross country race are distinctly peculiar. With 100 metres to go, there are two fences in that distance, and once the last fence is cleared, the horse in front of Samphire is described as being 5 seconds ahead, which means by my calculations he’d be long over the finishing line, and not still have time for an exciting and drawn out finish.

Unfortunately the inaccuracies (and there are more) killed the book for me. I really can’t recommend it as a horsey read, because of them.  If you look at this book purely from the point of view of the characters, then it is a good read. Jill Hucklesby is particularly good on the inter-action between brother and sister. The strong affection between them, and the teasing and occasional irritation, is beautifully done. If you can grit your teeth and get past the equine inaccuracies, then this is a decent study of the effects of grief and illness.

Anonymous said…
This story is fiction so of course it is going to have inaccuracies. This story is about bonding and hardships with overcoming them. Getting on Samphire so quickly shows he trusts her. The book title didn't really give it away. She could have done it were she gets the other horse, then somehow finds Samphire again. A little imagination can go a long way, and in this book, it did
20 May 2019 at 17:28