- September 05, 2013
Eleanor McGraw is Katharina Marcus’ first book, but I must say it doesn’t read as if it is. It’s an accomplished piece of writing. Heroine Eleanor doesn’t have the usual pony book heroine background. She’s the daughter of a rock star (long since faded from the scene, though he keeps in touch) and a folk musician. Eleanor’s not had a stable background, but at last her mother has settled down with Kjell, a Swedish dentist, with whom she’s expecting a baby. The family have moved to the south of England, and Eleanor’s about to start yet another new school, which means yet another group of people who have to get used to the fact the only way Eleanor’s going to look like everyone else is if she grows another foot and puts on another stone. 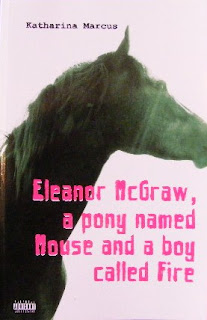 Eleanor’s life has given her a fair degree of self-possession, which she needs. The new school doesn’t go well, but there are two things that make it a bit more bearable: a pony she’s found near her home, alone in a field, and a boy, Pike. Pike, it turns out, knows the pony. He lives on the same farm, which used to be a livery stable until his aunt sold off all the ponies but this one, Mouse, who’s due to go off to rejoin the other horses in a couple of weeks. But until then, Eleanor can ride.

There’s a lot that’s odd about Pike. He used to ride, but he won’t now, and there are parts of his life he refuses to let Eleanor into, despite their growing attraction. When he does let Eleanor in, what’s there rocks her to her core.

Eleanor is a fantastic heroine: she’s fierce, funny and observant. Katharina Marcus treats Eleanor’s dawning sexuality particularly well: she steps back and lets her characters be as scared, enthralled and passionate as people are, without ever tipping over into prurience. It’s a real challenge to write sex scenes, particularly with teenagers. that do not give you the feeling of being a literary peeping Tom, and it’s one Marcus succeeds in. There’s considerably more to Eleanor and Pike than this though: both their lives are changing utterly, and you are absolutely with them both as they negotiate the two weeks before Mouse must go where she’ll be happiest, back with other horses.

This book is a cracking read, from an author who’s not afraid to tackle what it’s really like being a teenager.

Thanks to the author for sending me this book

Anonymous said…
As a "horsey" family where even my 6 and 8 year old grandchildren have their own ponies I was pleased at the accuracy regarding the horses and people involved. Not sure really whether the book was meant for adults or younger people but it was an enjoyable story. 8 yr old Francesca enjoyed it though the relationship beyween Eleanot and Pike washed over her - she was more concerned with the animals !
13 August 2014 at 16:37

Jane Badger said…
That's interesting to hear - there's some bits I think do need to wash over an 8 year old! It's great when different ages can get something out of a book.
15 August 2014 at 09:30

Unknown said…
Just read this - really enjoyed it. Thought it was authentic and liked the satisfying ending. A good teen read.
23 October 2015 at 00:18