- November 26, 2012
My guest blogger today is, Jane Ayres, author of the Matty series. You can download Matty and the Racehorse Rescue for free today and tomorrow (26/27 November 2012).  The other two books are Matty and the Problem Ponies and Matty and the Moonlight Horse. All the profits from the books go to support Redwings Horse Sanctuary.


Black Beauty, past and present by Jane Ayres

I can’t actually remember the first time I read Anna Sewell’s Black Beauty.  I think it was over several sessions when I was staying with an aunt in Kent on a family holiday.  It was on the bookshelf along with other classics like Treasure Island and Little Women.   I was about eight years old, and got very upset about any kind of cruelty to animals.  I loved the illustrations in the book (and wish I could remember what edition it was).  I cried when I read about Ginger’s fate and got so angry I felt like tearing the pages out.  I wanted to attack the people who hurt Ginger.  I also felt like Ginger was being punished for being rebellious, whereas to some extent Black Beauty’s compliance and kind nature helped him to survive. 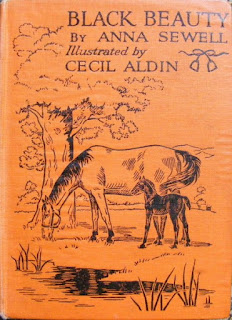 I was, and still am, greatly moved by the reason Anna Sewell wrote the book and the fact IT DID MAKE A DIFFERENCE.  She changed things for the better and that had a big influence on me.  Writers can change things.

Writing this post triggered me to find out more about Black Beauty’s author and I was surprised to discover that it was her only published book. It was written between 1871 to 1877, when her health was declining, confining her to bed and she often dictated the text to her mother. Published in 1877, when she was 57 years of age, Black Beauty is now considered a children's classic, but Anna originally wrote it for those who worked with horses, with her “special aim to induce kindness, sympathy, and an understanding treatment of horses."  The novel became an immediate bestseller,although Anna died five months after its publication, and Black Beauty is one of the best-selling books of all time. 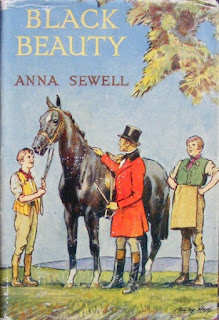 When I think about the books that have popular appeal, the books that are universally loved, they all have empathic characters, and a compelling story.  These are the qualities that endure.  And if the story has compassion as a central theme, the book will live forever.  Black Beauty has all these, and has inspired a host of stories that feature a distinctive, beautiful black horse.  What is it about black horses?  What makes them so magnificent and appealing?  I’ve often wondered about this.  We associate black with darkness, and when applied to horses maybe it is the idea of the wild black stallion that we dream of taming. There are plenty of examples of this in literature, the one that immediately springs to mind being Walter Farley’s The Black Stallion and all the sequels (I recall a title called The Black Stallion and Satan).

I later read a book that I was convinced was called Black Beauty’s Daughters and comprised 3 stories, one each by each Josephine, Diana and Christine Pullein-Thompsons which I remembered as Black Ebony, Black Princess and Black Velvet, but looking at Jane’s page I see there were several versions of the Black Beauty Family, so maybe I remembered wrong.  I loved the idea of stories told by his descendants. 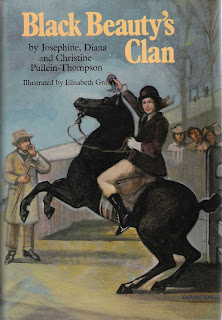 There have been various film versions of the book and even though I know the story inside out I still cry my eyes out when I watch them.  The cruelty always makes me despair at human nature and despite the eventual happy ending, I can never forget Ginger’s fate.

On a more cheerful note, the 1970s TV series The Adventures of Black Beauty (bearing no relation to Anna Sewell’s story apart from being set in Victorian England) brought a stunning black stallion onto our screens at Sunday teatime – played by at least 7 (or was it 10) different stunning horses.  Set in 19th century rural England, it created an idyllic picture of rolling green landscapes. The heroine, Vicky, (played by beautiful actress Judi Bowker) got to wear pretty long dresses and knickerbockers and cool lace-up boots and gallop to the rescue on Beauty every week.  I loved it!  I still have the theme tune on a 45” record (Galloping Home) and I had posters all over my bedroom wall of the stars and the horses.  Later additions to the show were sister Stacey Dorning and many years later the show was revived, set in New Zealand and I loved it all over again.  I get nostalgic thinking about it. 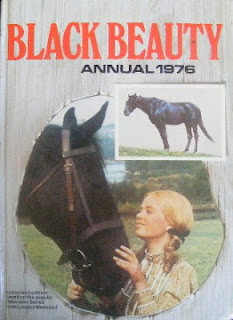 I don’t know whether the Black Beauty series was a key factor in the birth of glossy magazine Lucky Rider. Although it only lasted a year or so, I would reserve my copy at the newsagent and eagerly await each new issue.  Beautifully produced and glamorous, it gave an insight behind the scenes and into the lives of the stars and horses – a kind of celebrity horse magazine. And the stars from Black Beauty, both equine and human, featured heavily.

I’ve meandered somewhat but going back to the start point for the post, Anna Sewell’s iconic book had an enormous influence on the future of animal welfare and may even have been the first pony book.   How wonderful if she could see the work today of animal welfare charities and horse sanctuaries.  She has been an enormous inspiration for me and her achievements were truly revolutionary, on so many levels.  That her book is so loved and revered today is a wonderful tribute to her. Long live Black Beauty.

Goldielover said…
I was seven and had just finished grade one when I read it for myself in 1963. I was familiar with the story already, as my mother had read it aloud to me a year or so earlier. I count it as the first larger book I ever read. It was a dark blue hardcover published by Frederick A. Stokes with the Cecil Aldin illustrations (an earlier American edition). I still own it.
26 November 2012 at 14:01

Lisa G said…
I was read a small "picture book" Black Beauty when I was very very young. My mother read to me every day and that picture book was one of my favorites. It was, of course, pretty happy and Ginger never died...I still have that picture book although it is pretty worn and tattered. I read it to my girls when they were small. I read the complete novel probably about 3rd or 4th grade, when my reading skills were up for it. I still have THAT Whitman edition-59 cents at the dime store.

Viivi said…
I didn't even know about Black Beauty's back story, but like many others, it was one of the first horse novels I got to read and see as animated film as a child.. Touvhing, so very touching. I should find one copy for my bookshelf.
26 November 2012 at 22:12

Jane Badger said…
Nicola, that is one of life's mysteries.

madwippitt said…
One of the first books I remember reading all by myself! There was a sequel by Phyllis Briggs which my uncle bought for me, but I always preferred Anna Sewell's original.
And the TV theme tune - everyone should have a Black Beauty moment when you call your horse's name, see his head fly up and watch him gallop across a field, jumping a little brook on the way to greet you ... naturally you find yourself singing the theme out loud at the same time as your heart swells with love ... and possibly grateful no-one else is around to witness it ...
27 November 2012 at 12:25