Elaine Walker - Virtual writer-in-residence - October 2012
Elaine writes fiction and non-fiction about the horse. Her work has been featured at The Guardian Hay Festival and translated into several languages. Her book The Horses, mentioned in this piece, is an excellent post Apocalyptic story, in which a family who have been holidaying in remote Scotland find that everyone who lived in any community numbering more than a few is dead. The family are trying to survive on a Scottish farmstead, but life is desperately difficult, particularly when the family’s father dies. And then the horses come...

Moorland Mousie, The Story of Heather, Son of Black Beauty - the fictional horses that inspired my childhood were herded out of the past when I came across Jane's website. I found books I loved there but was also reminded of others, many with titles that escape me but horses I've never forgotten. I remember a head-shaker called Daybreak saved, like many fictional horses, by the insight of a plucky teenager - I named one of the equine characters in my novel, The Horses, after him. Then there was a mare that throws her head so high she hits her young rider in the face, causing nosebleeds, and eventually runs away over a cliff.  I thought of her a lot when I bought an anxious Appaloosa whose first response to anything was to throw his head up. One title I do remember was Three Ponies and Shannon (Diana Pullein-Thompson) - my first pony was called Shannon, though the one in the story is an Irish Wolfhound. I don't remember the main character's name though I think her ponies have names like Sonnet and Sonata. While I was tempted to refresh my memory on all these books before writing this piece, I decided to let them remain partial. Even when I find a copy of a book I once loved, I often just put it away safely without opening it, wary of undoing the spell in the attempt to relive the magic. 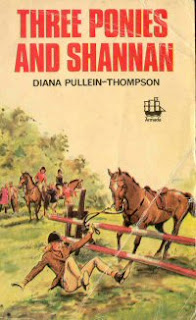 As a very small child, fictional horses gave their names to the hobby-horse my dad made, a tricycle and my scooter - Stardust, Flame and Caesar.  I sliced my ankle open 'galloping' home from the sweet-shop on Caesar and still have the scar. While I didn't have a Sindy doll until I wanted to be friends with Sylvia, who collected them, I did have Sindy's horse - named Kunama, after the daughter of Thowra in Elyne Mitchell's Silver Brumby books. My sister had Patch's pony but I don't think she ever had the Patch doll to go with it. Real horses were on the scene by then and neither of us had much time for dolls. We were both readers, though. How many of us, I wonder, find the first steps towards a life with horses between the covers of a book?

The books I enjoyed fall loosely into three categories - stories told by a horse, realist children’s fiction centred on a horse with a problem, and fantasies where horses shared exceptional bonds with their riders.

From an adult perspective, it's easy to understand the appeal. Stories told by a horse often offer lessons in life that are really more about understanding ourselves than horses.  But the human longing to communicate with animals, which has a long history, is easily assuaged when the animal can come forward and start the conversation. Dr. Doolittle was a favourite of mine too. What are we looking for when we want to talk to animals? The cynical answer might be, just another way to control them, but maybe at a more instinctive level we're after genuine understanding and a way back to subtle perceptions we've lost touch with.  My interest in this lead to The Horses but the foundations were laid in childhood. 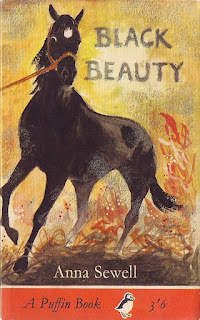 The second category, realist fiction, can fulfil similar needs but in a solid hooves-on-the-ground I-can-do-that way. The horse with a behavioural problem, often teamed up with a teen who struggles to be understood, can become a vehicle for personal growth through empathy. In terms of plot resolution, the troubled horse might also be the means by which the troubled teen is revealed as a worthy individual. Interestingly, Equine Assisted Therapy has started to use the tendency of the horse to mirror humans for just this purpose.  For the reader, such realism can offer an example. While an actual conversation with a horse might be limited unless he's Mr. Ed, the patience and perception involved in getting to the cause of a problem is something any reader can put into practice when they close the book and head outside with a halter.


The third category, fantasy horses, offers the perfect horse-human relationship, based on mutual trust, respect and understanding - again, the foundations for The Horses are evident. I was especially fond of the horses in Stephen R Donaldson's The Chronicles of Thomas Covenant, which I discovered as an older teen. While Gandalf focuses his attention to call Shadowfax when he needs him, the Ranyhyn horses pick up on the needs of the rider of their choice before the human is aware of it. This is enormously convenient as a plot feature for the writer, of course, because the hero doesn't have to take time out of the adventure to find, catch or look after a horse before the need for one becomes urgent! But from a horse-loving reader's point of view, what could show a more perfect bond?

The ideals we aspire to in relating to horses can be expanded in the imagination more easily than when we're trudging across a muddy field, especially as a youngster off to catch a pony that is far more knowledgeable than we are.


Bay Bess and Cuddly Dudley, the two ponies I had lessons on as a pre-teen, were riding school veterans who sensibly held a 'do less' work ethic. My own ponies, worldly-wise Shannon and terrifying Tina, had quirks I wasn't really experienced enough to understand. But I had a whole herd of imaginary horses (out of Bel Bel by Shadowfax). They combined wildness and perception with a total devotion to my deeply intuitive leadership - something my own horses were often slow to pick up on! Across the valley from my home was a small field shaped like a teardrop on the side of a rocky tree-covered hill. It appeared to have no access track or road and I never managed to find my way to it, even though I rode, walked and cycled all around that hill-side with my friends. I'd stand and look at it though, watching my favourite imaginary horse - a silver-grey, called Throwa, of course - gallop over that field with his ears pricked forward, his shimmering tail riding his wake. The seemingly secret nature of the field added to the romance of this dream because I never stood at its gate in the rain having to face up to him not being there. 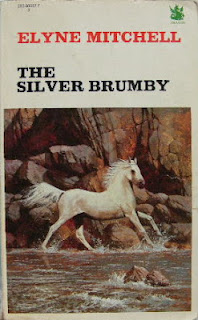 While the imaginary horse won't stand on our foot or refuse to come when we call, it can nevertheless painfully reveal our weaknesses. One of my group of horse-mad friends came up with a 'real' imaginary horse that she convinced us all her parents had bought for her. We awaited his arrival with great anticipation as she wrote down the story of how she found him in a hand-made book we read in installments. He was, inevitably, misunderstood, in poor condition and needing a sensitive 11-year-old girl to save him. Once she'd selflessly cared for and then rehabilitated him, what could his owner do but sell him at a bargain price reflecting shame and a complete change of heart? He was called Shanty, a name she found in a novel, but adapted so she could write a rhyming poem about him: 'I cantered and cantered and cantered and cantered, /Across the beach on my glorious Shantherd.'  I remember how we began to get suspicious as his arrival date kept changing and can still see her crying when her father told us all Shanty wasn't real and punished her for lying. We were disappointed but perhaps just a little bit pleased that she hadn't outdone us all by having a dream come true. The power of the fictional horse, especially when it makes its home in our imagination, should never be underestimated.

Christina Wilsdon said…
Spot on. Wonderful commentary. Love the story of the poor girl with the imaginary horse she convinced people really existed (except for the sad end, for her)--I myself was led around by the nose by a girl who claimed to have ridden a horse to victory in a race in Portugal at the age of 11 and then had some sheik (from Portugal??) send her home with the foal of an Arabian stallion...
2 October 2012 at 15:05

Jane Badger said…
But we so want to believe, don't we? I was always endlessly asked round to ride her ponies by a girl who did in fact have them, but not once was I actually allowed on one of them.
3 October 2012 at 14:56