First catch your unicorn: the pony book and fantasy

- September 14, 2012
The pony book has often nodded towards what was going on in the children’s book genre as a whole; adventure in the 1950s, realism in the 1970s, and from the 1990s, fantasy. In 1997, J K Rowling’s Harry Potter and the Philosopher’s Stone was published. It was an astounding success, and spawned a host of fantasy-themed children's literature. The pony book, an essentially practical genre, is not perhaps the most natural of allies for fantasy, but this did not stop publishers eager to jump on the bandwagon. Pony author after pony author leaped, with sometimes miserable results, into the fantastic.

Elizabeth Lindsay’s Magic Pony series (12 books, 1997-2006), the story of a miniature magical pony, was the first, but by no means the last. It was aimed at a rather younger reader than pony books of previous decades. Most of the pony book fantasies were. Linda Chapman wrote several series on Unicorns. Prolific author Jenny Oldfield wrote the My Magical Pony series (2005-2007); Sue Bentley the violet-eyed Magic Ponies books (2009). Even Babette Cole, scourge of nits and snot, wrote a four book series based on unicorns: Fetlocks Hall (2010-2011). 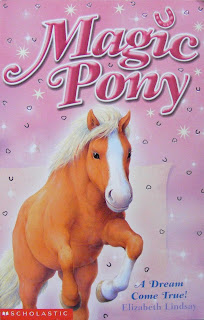 These fantastic horses all spoke. Stories where it is the horse who is the magical partner tend to be less successful than those where it is the human who has some sort of power (Linda Chapman is an honourable exception to this rule). Human characters, when given magical powers by their authors, are still allowed imperfections. The magical horse is generally not. The noble equine heroes pontificate from on high:  “...Friendship is important. Is it not worth fighting for?” says Comet in Sue Bentley’s Magic Ponies series. Jenny Oldfield's  My Magical Pony series has, Shining Star, the magical pony, who emerges into its heroine's world "from a shimmering mist, swearing her to secrecy, bringing his wisdom and kindness into her world.” 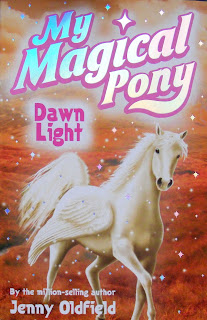 These magical creatures were a world away from the talking ponies who appeared earlier in pony book history. These were generally recognisably equine; their only power speech. John Thorburn's Hildebrand (1930) was a bolshy piebald condemned to eating only things which began with an H; which did unfortunately at one point include hens. Primrose Cumming's talking ponies in her classic Silver Snaffles (1937) had a distinctly tart attitude towards the human children they taught in their magical riding school. C Northcote Parkinson's ponies in Ponies Plot (1965) had a similarly astringent view of humanity. These earlier magical equines corresponded with their human counterparts as equals. Making them superior, as some of the fantasy series of the 1990s and 2000s did, led to an unsatisfactory read. The horse as a god-like figure of moral superiority is an uneasy creature; in these books it is an essentially neutered creation, devoid of any wrath and judgement which might lend passion or interest.

It is interesting to ponder why this strand of pony books tends to unsatisfying perfection. Authors seem to take the noble qualities of the horse; imbue  him with superhuman attributes, and forget the real horse, which kicks, bites, bullies and sulks. Is it wish-fulfilment, and if so, in whom? Author or reader?

More satisfying fantastic reads give the human supernatural powers, rather than the horse. The best of these take a realistic look at what the possession of magical gifts would mean. The Canadian Angela Dorsey is a rare example of an author who manages to combine believable fantasy with decent plots and characters. Her Horse Angel, Angelica, could easily be sickly-sweet, a glossy puff of angelic perfection, but she has real difficulties reconciling her angelic state with her presence on earth.  Dorsey's most recent series, Whinnies on the Wind, features a heroine, Evy, who can communicate with horses telepathically, but this is grounded in a setting of such stern practicality - Evy and her mother live without electricity or running water in an area where -30 degrees is considered warm - that the whole gels as a thoroughly readable adventure. 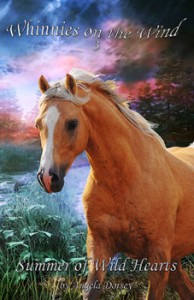 British author Janet Rising looks at fantasy with a wry eye in her Pony Whisperer (six books, 2009-2011) series. Her heroine, Pia, can also hear horses, but she has no gifts. What she does have is a small statue of Epona, the Celtic horse goddess. When Pia has the statue, she can hear horses. When she doesn't, she can't. The horses she hears have reactions that are recognisably horse-like. The mixture of horses and fantasy tends to kill of any sense of humour pony book authors might once have had: it is difficult for utter perfection to be funny. Janet Rising's approach throws an affectionate, and thoroughly realistic light, on her equine characters. 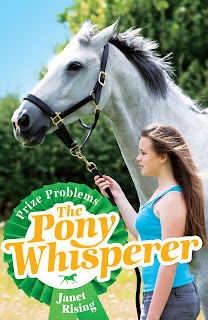 The addiction to vampires seen in YA fiction seems to have passed the pony book by, but there are now titles which inhabit a more interesting and gothic territory. American Maggie Stiefvater’s brilliant Scorpio Races (2011) reworks the myth of the water horse to terrifying effect. No tame, silvery creatures these: they are creatures of appalling ferocity, and encounters with them tend to be fatal. 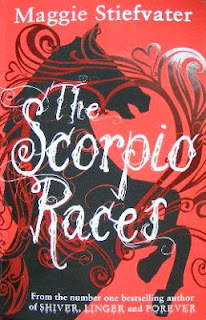 None of these books place the horse above humanity: human and fantastic creature exist as equals. They are far more satisfying reads because of it.