Anne Bullen and a horsy Sunday


Here I am, fresh-ish from the Anne Bullen exhibition, on what what was a thoroughly horsy Sunday. After rocking up late to the British Museum (train late) to meet my friends, we whirred round the Horse exhibition, which finishes on the 30th September: the Museum are obviously keen to divest themselves of their horsey merchandise before then. Much of it is on special offer. We then trekked off to St John's, Hyde Park, for Horseman's Sunday where those London horses and riders who can get there gather for their horses to be blessed.


Riders are a hardy lot, generally, and they needed to be on Sunday, because it rained, and once it had finished raining it poured. And carried on pouring. The horses behaved amazingly well. The Hyde Park Stables equines had beautifully plaited manes and tails, with riders equally smart. I wondered if there had been pony book scenes of lost needles, and fraught wailing at ponies who refused to stand, before all the quiet efficiency we saw at the service.

There were police horses, and two from the army - one dark bay turned out, as was his rider, in staggeringly glossy perfection. He rode beautifully too, that soldier. There was a fleabitten-grey called Freya, only young, and pacing along through the crowds with the sort of fidgety energy that made me glad I was not on her and that her capable rider was.

The priest took the service from horseback: whether he was a rider or not I couldn't say, but I am sure much devout prayer was exercised that morning to ward off any devilish impulses his horse might have been prey to. It stood, as good as gold, with that resignation riding school horses - those that remain riding school horses, anyway - soon learn. Horseman's Sunday was presumably just another in a long line of peculiar things humanity visited upon it. 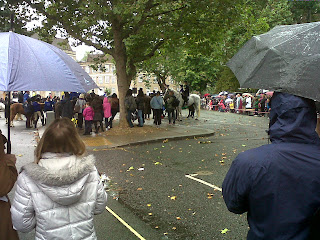 Most of the riders were from the Hyde Park  and Ross Nye Stables (and how wonderful it is that the stables still remain and have not been turned into spectacularly priced flats), but there were two riders from the Ebony Horse Club in Brixton; riding their coloured cobs with casual efficiency.

Once the service had ended, and the horses and ponies (an awful lot of coloured cobs), and the one carriage, pulled by a Friesian, had filed past and been given their rosettes, we piled off, back through Hyde Park, heading for Knightsbridge and the gallery.  In the fifteen years I lived in London, never once did I go to Hyde Park. It was not exactly teeming on Sunday; the deluge keeping away only the keenest; joggers and personal trainers, and a small group of women, football training; faces alight and utterly unbothered by the weather. We crossed Rotten Row, a wide expanse of sand scarily near to the road. I still harbour ambitions of riding side-saddle along the Row. I want to be like Sylvia Tietjens, in the last episode of Parade's End, riding in the Park, exquisite on a black horse, saying to my companion, "If I divorce Christopher, will you marry me?" Well, probably not the last, but riding with utter elegance on a coal black horse, yes.

The Gallery is in one of those chi-chi roads which we entirely lack in Northamptonshire: Christian Louboutin was on the corner, and Annick Goutal (alas closed; I do like stonkingly expensive scent) just about opposite. I have no photograph of the gallery as an enormous 4x4 was blocking my view of it and by that time I had scented my quarry; the equine illustration and was intent only on getting in. 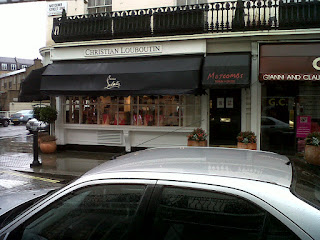 The gallery is in the ground floor and basement of a town house; not therefore vast, but the small scale suits Anne Bullen's drawings, which need to be seen at close quarters. The exhibition commemorates the passage of 100 years since her birth. Born in 1912, she studied at the Academie Julien and the Chelsea Art School. She married Lt Col Jack Bullen and they had six children: Anthony, Michael, Jennie, Jane and Sarah. Besides bringing up her large family, and running the Catherston Stud with her husband, Anne continued to draw and paint. The first book she illustrated was Joanna Cannan's A Pony for Jean (1936), and as the pony book drew breath and cantered off, secure now that it had hit upon the girl-gets-pony formula, Anne cantered with it. There are just a few of her pony book illustrations in the exhibition; the two from Golden Gorse's The Young Horsebreakers (1937) are delightful; even more enchanting in the flesh. One is on the cover of the catalogue. 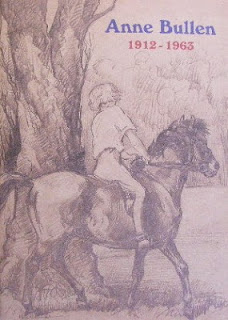 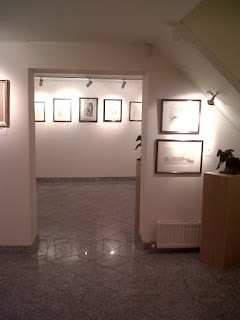 I was particularly interested in the occasional contrasting styles Anne Bullen used. Most of the examples in the gallery are the pencil drawings we are familiar with through her book illustration, but I loved her vibrant and dashing Hackney pony; far more emphatic than her usual style, but he is the one I would like to have taken away with me. 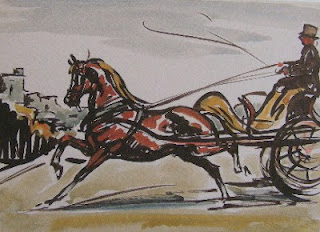 Or if not him, the dramatic fall; 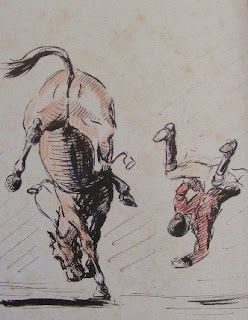 or maybe the quintessentially Bullen skewbald mare and her foal, probably the most romantic of the lot. 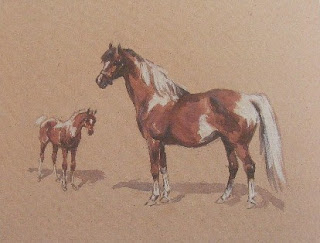 The exhibition is a delight. There are endless ponies; hounds, and also another side of Anne Bullen: horses being rescued from fire, and lost, wartime children.


Anne Bullen carried on drawing and painting throughout her life. She died, aged just 51, from cancer in 1963. She illustrated over forty books, and her work appeared in many equestrian magazines.  It is Anne Bullen's ponies that gallop through many pony-mad girls dreams; those who grew up in the halcyon days of the pony book at any rate, when illustrations had not been banished as too expensive.

The exhibition, when we went, was nearly sold out: rashes of red stickers everywhere. If you can possibly go, do. The exhibition is an enchanting insight into one woman's vision; it's life with horses as we dream it should be. 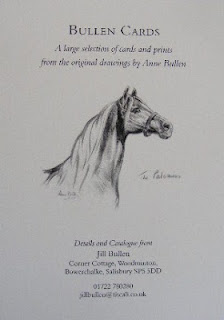 Thank you to the Osborne Studio Gallery for opening up for us on a Sunday. We were, and are, very grateful.

A note on horsy: I tend to use horsy, but see horsey bandied about too. I checked with the Oxford English Dictionary, and both variants are allowed. I shall now spray both of them about without any attempt at consistency.
Pony books - illustrators

Christina Wilsdon said…
What a wonderfully hors(e)y day in the city. Love that there's a horse blessing event!
28 September 2012 at 01:54

Jane Badger said…
It was great, if soggy. I do want to write more about Horseman's Sunday, which I think was originally set up as a protest against the development which was taking over all the stables around Hyde Park.
28 September 2012 at 10:15

www.cloudline.co.uk said…
does anyone know where I can still buy an Anne Bullen (original) picture. I adore her work and because I live inScotland missed the news of her recent 2012 exhibition . When I heard about it afterwards I nearly wept, as Ive loved her pictures all my life (58 years.)