It doesn't normally take me too long to write reviews, as I am usually pretty certain before too long about what I want to say. What stymied me with this book was having to read it again almost immediately after I'd finished it, as I liked it so much.  Susanna Forrest has the gift of writing about horses with passion and insight, whilst avoiding the sentimental. No rainbow bridges here. No parades of pretty horses either, and certainly none of that discomfort you get when peering at someone's private obsession, because although billed as a "memoir of equine obsession," Susanna Forrest's experiences are those of most of us who love horses. She does not concentrate only on her own experiences, but on aspects of the horseworld that might explain that obsession. 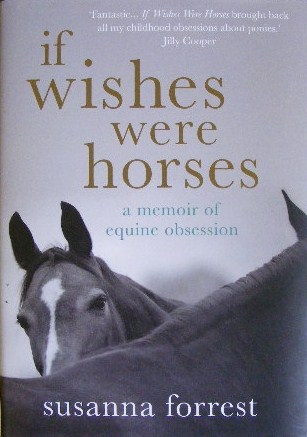 There is the genesis of riding ("the first little girl who loved a pony ate it"); Swedish "worst ones", girls written off by the welfare system, who find a way out of their difficulties through horses; pony books; pony racing; and side-saddle - what horses meant to the Victorian girl, able to be daring in her corsetted habit in a way she simply could not be on foot. The chapter on Pat Smythe does not concentrate just on her successes as one of the first women to be allowed to compete in Olympic equestrian events, but on her amazing progression in a world dominated by men, the people she and her groom Paula called "the Colonels". And there is an exploration of the old chestnut flung at every girl who rides once she hits teenagerhood - is the love of horses a sublimation of sexual desire?

Susanna Forrest's descriptions are brilliant: here she is on an early riding lesson:


"On a wintery day we perished in the winds that swept across the old quarry. My teacher told me that my new thick string gloves made my hands too clumsy, so I buried my bare fingers into Gipsy's scurfy brown mane and didn't cry till I got back to the car after my lesson."

And there you have the obsession that overrides everything else; comfort, the desperate urge to cry.

Her obsessions are, of course, mine. There are many, many parts of this book where I was completely and absolutely in sympathy with the author: the attempts to pick up riding again in adulthood; the paucity of school friends who share your obsession; the snide comments by teachers on your horsiness, and the recognition, in your teenage years, that perhaps in order to survive in this world, it might be an idea to moderate your obsession, or at least not express it. And the fear of riding which can strike in later life, "the terrors [which] furled out in front of me like furiously growing branches."

I wonder what it's like to be my parents, or indeed Susanna's, parent to a child immersed totally in a world outside the home.  Our mothers both liked horses; Susanna's rode and had horses, and found her daughter Tav, the pony she looks after and rides through Norfolk. The lyrical chapter on Tav is as good a portrayal of the relationship between girl and pony as anything you will find.

She makes you see what she sees: the clever pony nature of Tav; the slew of sparkling horsy ephemera in Olympia's shopping village; the tension of the boy jockey waiting for the pony race to start ("Tom pulled up his  yellow-plastic goggles and retreated into some private, nerve-rattled space); the flat landscape outside Berlin where she rides.

My one quibble with this book is a completely unreasonable one.  By the time I reached the chapter on show jumping, and how it has virtually vanished from the public radar,  I was so used to finding the author a god among women when it came to equine insight that I expected a 10 point plan on how to rescue show jumping and its image. But, as the author makes clear, the image of show jumping is so caught up in how the equine world sees itself that rescuing it  is not going to be straightforward. Susanna describes her visit to Olympia, and the contrast between the sparkly pinkification of stuff sold to horsey girls, and the sheer athletic power of the showjumping they are all there to see, a power almost completely ignored by terrestrial television, who prefer their horses in conjunction with celebrities like Katie Price.

Is the disappearance of equestrian sport on television to do with the trivilisation of the horsey world: the mindset that slings bling at everything? Which allows those outside the sport to dismiss it as the sparkly fantasies of little girls? Does the horse world need to de-bling its act? After all, the power and drama of the sport should speak for itself:


"In a ringside seat, tucked behind the advertising panels for H&M, you can be close enough to hear the rhythmic, fluttering snort that horses make to mark every stride. You can see the way their fine-skinned coats wrinkle for a split second on their necks or their quarters; you can hear their joints click as they land after a fence and sometimes a quiet 'oof' noise of effort that comes from their chests. I got close enough to feel the disturbance in the air as they passed, their lower lips wobbling with concentration."

But this isn't a book which offers to sort out the ills that afflict the horse world; it observes it with quiet passion, and does that quite brilliantly.

callmemadam said…
I saw this book reviewed last week and immediately put it on my library list. Now I'm even keener to read it, thanks to your review.
24 March 2012 at 10:32

madwippitt said…
Thanks for the heads up on this one which I might otherwise have missed. I downloaded the free chunk onto my e-reader and was absolutely hooked. I'm looking forward to reading the rest of the book now.
25 March 2012 at 11:14

Victoria Eveleigh said…
Brilliant review, Jane, and I agree with it 100%.
What a fantastic book - a terrible thing to find when I'm supposed to be working hard. Like you, I've read it twice and still catch myself dipping into favourite bits. It deserves all the great reviews it's getting.
30 March 2012 at 15:45