Thank you to Orion for sending me this book


It's a rare pony book that deals with equine life in London, let alone inner city London, in the shape of Hackney. Horses in London are unusual: they need space, and space in London is expensive and tends to be given over to humans. 15 year old Casey Blue, the heroine of this novel, lives on the eighth floor of a tower block in Hackney. She cannot afford riding lessons; she and her father live hand-to-mouth now that he has emerged from prison, and is unable to get a job. Hope Lane Stables, at which Casey volunteers, is "a last ditch stand against the city's concrete advance." 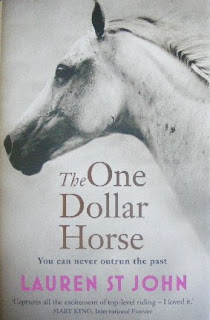 Casey has a seemingly unachievable aim: she wants to ride at Badminton. The moment that becomes apparent, you are aware that the novel is almost certainly going to have to move outside London, and away from the gritty, scrabbling round for scraps reality that is the novel's strength in its first section. Cross country courses (with the exception of Greenwich, which is a. not exactly open to all and b. not permanent) are short on the ground in London, and if cross country is your aim, you will have to gallop over large screeds of green at some point.  That is the thing with trying to do horses on no money: sooner or later, particularly if you want to compete, you are going to need large amounts of it from somewhere, even if you do have a one dollar horse, which Casey has: a wild, starved creature close to death her father buys for all the cash he has on him: a one dollar note he found in the street.  Sure enough, Casey has a fairy godmother; a mystery sponsor who pays her way.

I wonder what this novel is telling children; nothing that isn't true, I suppose,  If you come from a working class background, you have a stupendous mountain to climb if you want to ride competitively. Competing with horses is expensive, and you will need hard work and an awful lot of  luck to get hold of the money necessary and when you get it it it will almost certainly take you away from your roots. Casey moves to Kent to work on her eventing, and starts to find Hackney alien when she returns, and to feel a distance from her father when he visits.

It is a common complaint of the pony book; that it is elitist, full of middle class and monied girls and their ponies. This book has them, but has a genuinely working class girl with a convincing struggle, though it still  ticks all the classic pony story fairytale boxes; girl gets horse; has a special relationship with him; competes successfully. It shows many things I like in a story: a girl working hard against great odds; a cast of interesting characters, a villain who can actually ride and yet, and yet.... I finished the novel feeling there was something missing.

I think it's the X Factor. This book reminded me of the X Factor. Work hard enough; want it enough, and you too can have your dream, is what the X Factor tells people, though we all know that's tripe: however much singing might be your dream, if you can't sing in tune success will probably not happen.  I think in a novel that starts off realistically enough, it's the total and utter contrast with what comes next that jars: the contrast between grinding poverty and struggle and staggering success. The book almost reads like two novels. If I can compare this book to anything published recently, it's Sheena Wilkinson's Taking Flight, in which the working class hero ends up being offered a job at the stable, which, in the scheme of things, is a bit more likely than competing at Badminton when you're not out of your teens. If you start off reflecting real life, I'm not sure how wise it is to switch so completely to fairytale mode.

That said, I'm sure this novel will find many fans. It's an involving read; the characters are interesting (I particularly liked Casey's father). I liked the portrayal of the eventing world and its reaction to Casey - the secondhand breeches left hanging on her trailer door for her were a neat touch.  Maybe I'm being overly cynical: there's nothing wrong in showing dreams coming true.  Fairly hefty leaps of imagination are often required in children's books. I made that leap while reading the book, but when I put it down, after finishing the last page, felt oddly flat; oddly short-changed.
Review