- July 28, 2010
One huge benefit to writing about pony book authors on my site is that they get in touch. I’m delighted that Jane Hubert, who wrote Water Wagtail under the name Jane de Bargue Hubert, contacted me, and agreed to be interviewed for this blog.


JB: You wrote Water Wagtail when you were very young. What inspired you to start writing it?
JH: I had rheumatic fever when I was 8, and had to lie flat for weeks and weeks. My mother gave me a notebook and pencil and told me to write. I wrote a book then called ‘Happy-star, the wild pony of the moors’. That started me writing. ‘Happy-star’ got lost years ago. I wrote ‘Water Wagtail’ later - I think I started at about 10 or 11, but I can’t really remember. I don't remember what gave me the idea for Water Wagtail. I desperately wanted a pony, and to be part of that sort of life, I suppose!
JB: Did your family know you were writing the book?
JH: Yes, but I don’t think any of us thought of it as an actual book!


JB: How did it get published?
JH: When I was 14 my mother got it typed up and sent it to my grandfather, who had some connection with Eyre and Spottiswoode. Incidentally, I did my own illustrations, but they were rejected! I think I still have a draft of the next book, 'Tarantella', but I don't think I ever finished it. I'll dig it out and see. 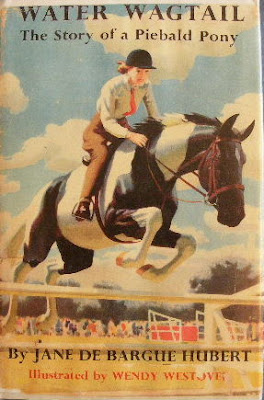 JB: What books did you enjoy reading yourself at that time, and did they have any influence on what you wrote?
JH: I read every pony book I could find, and that was all I wanted for Christmas and birthday presents. I was mad about horses from the age of 3. Yes, they did influence what I wrote – I think Water Wagtail is very derivative, especially of the Pullein-Thompson books. I also loved Monica Edwards, Eleanor Helme and Nance Paul and Kathleen Herald. I still have some of them, and also ‘Older Mousie’ by Golden Gorse (illustrated by Lionel Edwards), Enid Bagnold, Anna Sewell. ‘Sabre, the horse from the sea’ is probably my lasting favourite; it is not a ‘pony book’ as such, but simply an incredible book about a girl and a horse. I wrote a third book in my teens, which was heavily influenced by ‘Sabre’.


JB: What was it like being at school and also being a published author? Did you tell your friends?
JH: It got into the papers, I think it was the Evening Star or something. The local bookshop in Horsham did a display in the window, and had a half holiday in honour of Water Wagtail.


JB: Can you give me a brief summary of the book?
JH: Jill has recently witnessed her mother being killed in a riding accident, and her father has gone abroad. She is sent to live with her aunt and cousins, and finds herself in a family that revolves around ponies, riding, and winning rosettes at gymkhanas. Jill is too frightened to learn to ride, and spends much of the time on her own as her cousins despair of her, and carry on with their pony-centred lives. After many months she gradually decides to try to conquer her fears, and is encouraged by her cousins, who happily include her in the life she had scorned for so long. She particularly loves one of the ponies, a piebald called Water Wagtail, but he has a wild and unpredictable streak, and her aunt decrees that he is too dangerous to ride. Jill, however, refuses to abandon him, and is determined to jump him at the next show. Her father comes back in time to see her win the jumping, her cousins give her Water Wagtail as her own, and she happily looks forward to a life with her pony and her dreams.
JB: Thank you! That’s as close as many of us will get to reading the book, as it really is phenomenally difficult to find!


Did you have a pony of your own, or was the book complete wish fulfilment?
JH: It was all complete and utter wish fulfilment! I had a donkey, but it was very difficult to get her to do anything at all - though I did teach her to jump a bit. I desperately wanted a pony, but didn’t get one until much later. A school friend and I used to bicycle round the country lanes looking for ponies, and then in the middle of the night we would creep out of the house and go and ride them in the fields or in the forest.


Your career has taken quite a different route to horses. Did you have any yen for a horsy career, or did life just take a different turn?
I spent years as a teenager earning rides by mucking out stables, but the passion faded to some extent in my later teens, and I wanted to go to university. I still have a yen to be among horses, and to ride, and still do sometimes. I still intend to start riding more often…


A lot of authors are dedicated readers. What did you enjoy reading when you were a child? Did you read many pony books?
As a young child I read pony books pretty exclusively. As teenagers my sisters and I read much more widely - books that were on the shelves at home or in my grandfather’s house, including Russian writers, Dostoevsky, Tolstoy, Chekhov and Maxim Gorky, D. H. Lawrence, Maupassant, Victorian children’s books, anything that we could find. I am sure we read other kinds of books as well, but I can’t remember them!


Are there any books (pony or not!) which inspire you?
I have talked about the pony books that influenced me as a child. Not sure where to begin since then!


What do you read now?
I am a social anthropologist, and in recent years I have done research and written about highly vulnerable people who have severe and profound learning disabilities and mental health problems, especially those who have been shut away in institutions since they were small children. I read a lot around these subjects, and about social exclusion in general. I still read other books, and poetry, but not a great number of contemporary novels. I recently reread ‘I Wanted a Pony’! It was good to read the bits that I particularly remembered, but I did find myself skipping chunks of it. It also made me realise how unoriginal 'Water Wagtail' is!


JB: Perhaps a bit harsh, bearing in mind your youth when you wrote it! Thank you very much for taking the time to answer my questions. Who knows what might happen if you find Tarentella and start it again?
Pony Books - Interview