- July 07, 2010
I've done various things to keep the wolf from the door in my time, and one of them was training people how to use computers. In the dim and distant past, having the Internet in the office was a New Thing; so much so that I would spend months in some London offices introducing people to the mysteries of Alta Vista and email. In the times when boredom almost became too much for me (and when you have shown the 100th person how to do a search for Chelsea Football Club it is difficult to resist the urge to scream) I would explore the Internet. Everything, I was told, was on there.
Except that it wasn't: not if you liked pony books. I'd resurrected my pony book collection and read it again. Where were the internet sites on Ruby Ferguson? The Pullein-Thompsons? Nowhere.
Someone will start something at some point, I thought, and went back to building my collection. This was in the heady days before Monica Edwards' titles had gone well beyond the normal purse. We used to holiday in Rye, as my infant son was appalling in the car (we had a very noisy Morris Minor, and to be fair to Fred, it was a bit much for all of us after a bit. Quiet it was not.) - anyway, there was only so much of the screaming we could stand. Rye was within screaming distance. It had plenty of bookshops. One of them specialised in Monica Edwards. Taking some very deep breaths, I coughed up as much as £10 for some titles, rejecting the horribly pricey £20 efforts. If only I had known.
I gradually added more pony titles, paying as much as a fiver for some of them. One day, I was in Oundle, in Geraldine Waddington's late lamented shop, and I saw four beautiful H M Peels:Jago, Untamed, Dido and Rogue and Gay Darius: all lovely, near fine, first editions. I bought them, and I sold the lot - on ebay. Such was my ignorance then I assumed I'd find them all again before too long. Ebay fired my enthusiasm for book selling, and I started selling other books: for years I'd squirrelled stuff away, thinking one day I'd have my own shop. I expanded operations to ABE.
By this time I'd met Vanessa Robertson of Fidra Books, after she'd asked my advice on how to set up as an Internet bookseller. She then ran Robertson Books, and, like me, sold children's and pony books online. Vanessa and her husband, Malcolm, started up a website to promote Robertson Books. It's about time you did the same, she told me. Promote yourself. Write about pony books. Now one of the wolf-from-the-door things I'd done involved teaching teenagers to use HTML. I can do this, I thought. Then I thought actually I couldn't, and in 2004 asked someone else to write the site for me. It very soon became obvious that it would cost me a small fortune to have someone else carry out my ideas for me, particularly if I wanted extensive daily updates.
Having a vigorous objection to spending money on anything that wasn't either a book or a plant, I searched around for build-it-yourself software that was free (I have since graduated to the paid-for variety). Vanessa recommended a webhost. I wrote a page on Jill. I agonised about it. I rang Vanessa about it (this girl is a saint, I hope you realise). Eventually I launched one little page about Jill. I wrote about the publishing history, and put up examples of the books I'd managed to acquire. 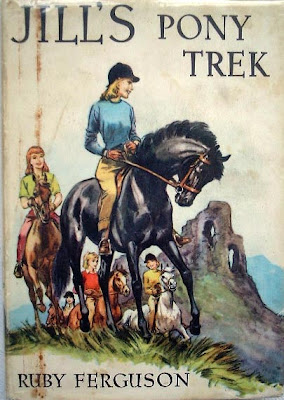 By this point, John Allsupp's excellent Monica Edwards site was up and running, and an American site, Ponydom, provided reviews of horse and pony books. No one had yet written a site providing what I wanted: every conceivable cover for every conceivable pony book, with information about the author and a review of what they'd written. It was a wide open field, and there was no one else in it. The whole cannon of pony book literature was there before me. By this time, I'd built up a database of customers, and they responded magnificently to my appeals for information. I wrote pages on Primrose Cumming; Joanna Cannan followed.
"How many visitors was I getting?" asked Vanessa. I had no idea. She recommended a visitor tracking programme (Statcounter). Wow. I installed it. Every day I logged in. It was utterly fascinating. People were visiting me, and once I'd learned how not to count myself, it was obvious that they were real people, actually reading my site. Some of them were on there for whole minutes - as many as 10! They lived in America; Australia; even Russia. I had 496 hits for the entire month of November 2005. 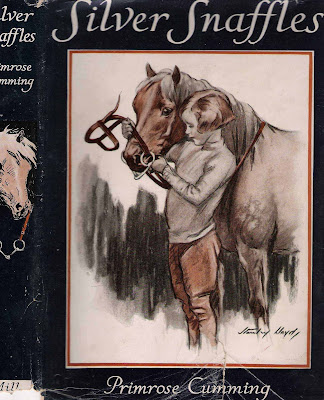 I added pages on what breed was in what book; what books to read if you wanted to read a story about a particular discipline. I wrote about my own favourite books. I submitted a piece to Folly Magazine on how to write a pony book (which they published). I added more authors. Country Living Magazine got in touch and featured me in an article they wrote on women rediscovering ponies. Pony book fans found me and contributed ideas, pictures and information.
Competition appeared, in the shape of ponymadbooklovers. There's nothing like a bit of competition for making one get one's nose to the grindstone and I moved smartly on from my leisurely contemplation of those pony book filled fields to doing some serious work producing pages. Vanessa added a blog to her site. You add one too, she said. You make me laugh. Aware that what I made Vanessa laugh with could never see the light of day, I demurred. Who was going to want to read my thoughts, I asked? Try it, she said. I did. I found I quite liked blogging. Lots of my customers commented on my posts. Wouldn't it be good, I thought, if they could start discussions instead of waiting for me to? I found Google forums, and added the forum.
I outgrew my first webhost, and had to switch to one who didn't restrict my bandwidth. That provided an interesting week or two whilst everything was transferred and re-written, as the files didn't appear to like their new home. I have now been resident on Fasthosts for a couple of years, and that's been a success. There are over 400 authors on the site: I have expanded operations to include all English language horse and pony fiction; there are sections on illustrators; Black Beauty; Pony Club Magazine Annual and the Pony Club Annual; series and sequels; pony book libraries and a character finder. My daughter joined me to consider the modern pony book. Authors agreed to be interviewed. I achieved a childhood dream and met Josephine and Diana Pullein-Thompson.
The website now averages 12,600 hits a month, with a high of 15,660 in March this year.
Reading this back, it does read as something of a puff piece. Are there downsides to doing the website? I remember reading in Bookdealer advice an Italian bookdealer gave his son, who was often tempted to research authors rather than actively sell them: time spent doing that sort of research didn't tend to result in sales, he said. It's certainly true that it's tempting to spend more time than I ought on the website, and I do fall into temptation. I could quite possibly do a great deal better if I did less on the site: it's difficult to be precise about the effect it has on my income. One of the aims was to attract people to my sales site, and I think it's done that.
I can live without the (fortunately very few) pony book fans who point out my shortcomings in research rather aggressively. Had we still been a nation that duelled, I suspect one fan would have called me out.
The downsides, though, are few: it's been a brilliant five years, and I hope that everyone who comes across the site enjoys at least some of what they find there. There are birthday celebrations: a competition (win a book token! win books!) Here's to the next five.
Website news

Anonymous said…
Congratulations! Your site is the #1 resource for information about pony books, the first one I turn to. And I *love* all the pictures of book covers. I hope you continue to find it all worthwhile.
7 July 2010 at 09:58

Christina Wilsdon said…
Happy birthday! I know I was thrilled to discover your site, because I thought I was the only American who'd ever read the Jill books and it was impossible to find out anything about Ferguson. And then of course this whole world of British pony-book authors came to light. Oh, how deprived was my Yankee youth!! All these books I will need to track down...next time I'm in the U.K. I'm raiding my relatives' shelves. Must follow up those articles you mention in your article, particularly the how-to-write-a-ponybook one--that must be funny. Once again, happy fifth birthday.
7 July 2010 at 15:22

Juxtabook said…
Happy Birthday! And many happy returns your site. I am astounded by what you have managed to do in the time, especially when I know how hard you've word as our ibooknet chairman.
8 July 2010 at 19:42