- March 06, 2010
Well, not quite - that was apparently March 4th. The Times today have a voucher for World Book Day, which you can use to buy a book for yourself, and another to give away. To support this, they have a feature in which they've asked various of the great and good what book they'd buy, and what they'd give away.

I always have a brimming list of books I'd like to buy, but top at the moment is Horses and Soldiers: a Collection of Pictures Painted by the late Gilbert Holiday, edited by Lyndon Holden, and published privately by Gale & Polden of Aldershot in 1938. Sporting artist Gilbert Holiday died at the age of 58, having spent the last years of his life in a wheelchair after a hunting accident. His works are not as readily accessible as those of his contemporaries, such as Lionel Edwards: he illustrated relatively few books and many of his works were commissioned by the military. Neither did he issue many prints. As I don't have a copy of the great work, I can't actually illustrate this section with a picture of it, but here is a copy of something I do have, Moyra Charlton's Three White Stockings. 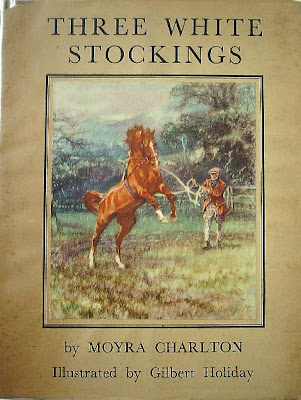 Gilbert Holiday was supreme at depicting the horse in motion: below is an plate from Moyra Charlton's Three White Stockings, one of the two books he illustrated for her. 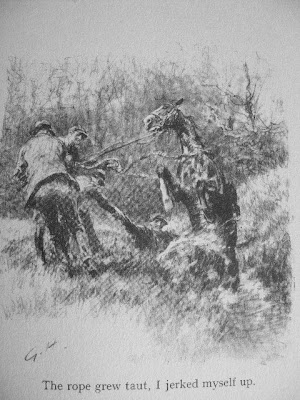 Three White Stockings (Putnam 1933) and The Midnight Steeplechase (Putnam 1932) are the easiest ways to get hold of Gilbert Holiday's work: both are readily available.
As to what book I'd like to give, I have I suppose to do that rare thing and write about a book which is actually in print. I'd give Hilary Mantel's Wolf Hall, which I found entirely engrossing. It points up the fact that history is, to some extent, a matter of how you interpret it. Whilst the facts of what Thomas Cromwell did are (in general) not in question, his motivation of course is. Having grown up with the belief, strongly shoved along by Robert Bolt's A Man for All Seasons,that Thomas More was all things good, I enjoyed reading Mantel's shading of his personality into something altogether more complex, and Cromwell's into something much warmer than the clever efficiency I have always admired.

If Wolf Hall had sold out, I'd go for Francis Palgrave's Golden Treasury: I usually have a book of poetry on the go: being a lark, I fall asleep early and fast and often the only thing I can manage to read (and I can't go to sleep before I've read something) is a poem. Palgrave's Golden Treasury was the first anthology of poems I read, as it was our standard school poetry textbook. I still think the book is a wonderful introduction to poetry, and was delighted to find out it is actually still in print. It has been added to over the years, and now features a post war section.
Books generally

Val said…
fascinating I'll come back and have a good read of this entry and the last when I get a quiet time (kids are off for spring break as is oh so competition for peace and quiet and the computer seat is great!
I've never heard of that artist before or the book wolf hall either.
6 March 2010 at 18:19